Oracle, the much-maligned software company that failed to build a functional insurance exchange for Oregon, has threatened to stop Senate Bill 1 from taking effect, but the bill had broad bipartisan support in the House to move the remaining state insurance exchange functions to the Department of Consumer & Business Services.
By:
Chris Gray 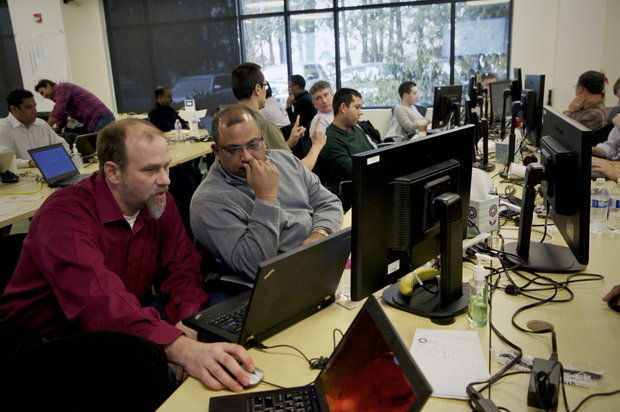 Ten Republicans joined all the House Democrats in Salem on Friday to send Senate Bill 1 to Gov. Kate Brown, closing the door on the failed Cover Oregon health insurance exchange, and placing the remaining state functions for facilitating the online portal under the control of the Department of Consumer & Business Services.

“It ends the catastrophe of Cover Oregon and moves [to DCBS] the successful functions of the creation of the health insurance marketplace that gave Oregon citizens the lowest-priced health insurance of any state in the country,” said Rep. Mitch Greenlick, D-Portland, the chief proponent of SB 1. “It ends an era and begins another era.”

The bill passed over the threats from the Oracle Corp. -- the software company the state has vilified for its failure to provide a working exchange portal -- that the tech company would go to court to stop SB 1 from becoming law. Oracle has argued that the state is dissolving the independent public corporation and moving the exchange to a state agency to get around copyright laws that protect Oracle’s software from unauthorized use.

“What do I care about what Oracle thinks? I think Oracle’s going to do everything they can to screw things up,” Greenlick told The Lund Report. “[Their actions] are to hide their criminal malfeasance.”

Greenlick noted that despite its high-powered lawyers, Oracle failed in court last week when they were ordered to continue to let the state use its software to enroll people in the Medicaid program. If Oracle had its way, thousands of low-income Oregonians could have been cut to the wind and denied the health benefits for which they are eligible under the Affordable Care Act.

“They were trying to punish us,” Greenlick said.

Friday’s vote in the House had much broader support from Republicans than the earlier vote in the Senate, which attracted the support of just two Republicans -- Sen. Jackie Winters of Salem and Sen. Brian Boquist of McMinnville.

Rep. Bill Kennemer, a moderate Republican from Oregon City, said he opposed the creation of Cover Oregon but he helped Greenlick push the bill on the House floor because as his mother told him, there’s no crying over spilled milk.

“The reality is we’re here today and we need to move forward,” Kennemer said, calling the Department of Consumer & Business Services a “trusted agency” that would honor Cover Oregon’s contracts. The drafters of SB 1 very deliberately hosted the bill with that agency in mind, which already hosts the state Insurance Division. They did not want to give it to the Oregon Health Authority, which has been blamed for many of Cover Oregon’s failures.

DCBS Director Pat Allen assumes authority over the exchange immediately upon Brown’s expected signing of the bill, although day-to-day operations of the exchange will continue through June 30 under the guidance of director Aaron Patnode, who may or may not be hired by Allen to stay on. The Cover Oregon board of directors, led by Liz Baxter of the Oregon Public Health Institute, is dissolved when SB 1 becomes law. The name “Cover Oregon” will almost certainly go away this summer when the state agency takes full control of the new exchange division.

The state contracts with the federal web portal, healthcare.gov, to provide the consumer interface for Cover Oregon, which will continue indefinitely. If the state plans to develop its own portal for the small-business market, or wants to undertake any information technology project for the exchange that costs more than $1 million, it needs legislative approval.

The 10 Republicans supporting SB 1 crossed ideological lines, including conservatives like Rep. Sal Esquivel of Medford and moderates like Kennemer as well as the caucus leader, Rep. Mike McLane of Prineville. Meanwhile, 14 Republicans opposed the bill, including the moderate Rep. Julie Parrish of West Linn.

Parrish told her colleagues that she supported the idea of helping her constituents afford health insurance, but had been opposed to Cover Oregon from the beginning because she did not believe that Oregon state government was competent enough to run its own exchange, which she said would not change if the Department of Consumer & Business Services took it over. “I didn’t think the state had the capacity to do the work,” said Parrish said, adding that the flame-out of Cover Oregon was even more colossal than her prediction.

She was joined in opposition by the more conservative Republican Rep. Jim Weidner of McMinnville, who said the federal dollars spent on the nonfunctional web portal were five times what Oregon’s residents expected.

Both Republican opponents talked about the continued cost to the state, compelling Greenlick to remind legislators that Senate Bill 1 doesn’t provide any general fund money to support the exchange. The new division at the state agency will be funded by transferring Cover Oregon’s remaining federal grant money as well as the commissions the exchange continues to assess on every individual health plan sold in Oregon.

“If we don’t pass this, Cover Oregon carries on till we find a different plan, and I’m not sure there is another plan,” Greenlick said.