Biden’s Covid Challenge: 100 Million Vaccinations in the First 100 Days. It Won’t Be Easy. 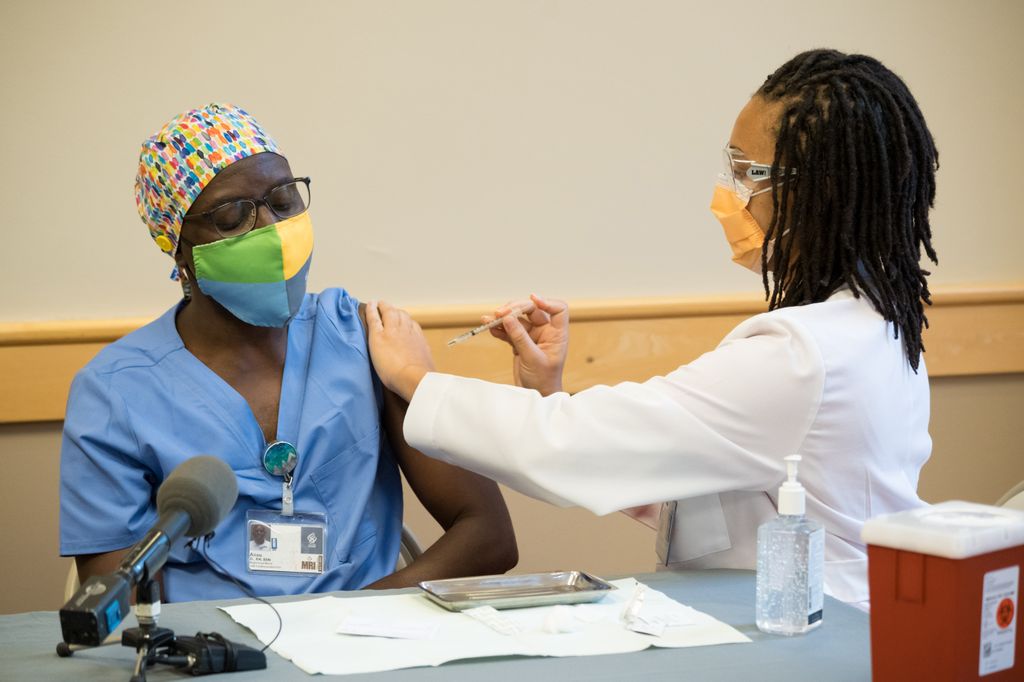 It’s in the nature of presidential candidates and new presidents to promise big things. Just months after his 1961 inauguration, President John F. Kennedy vowed to send a man to the moon by the end of the decade. That pledge was kept, but many others haven’t been, such as candidate Bill Clinton’s promise to provide universal health care and presidential hopeful George H.W. Bush’s guarantee of no new taxes.

Now, during a once-in-a-century pandemic, incoming President Joe Biden has promised to provide 100 million covid-19 vaccinations in his first 100 days in office.

“This team will help get … at least 100 million covid vaccine shots into the arms of the American people in the first 100 days,” Biden said during a Dec. 8 news conference introducing key members of his health team.

When first asked about his pledge, the Biden team said the president-elect meant 50 million people would get their two-dose regimen. The incoming administration has since updated this plan, saying it will release vaccine doses as soon as they’re available instead of holding back some of that supply for second doses.

Either way, Biden may run into difficulty meeting that 100 million mark.

“I think it’s an attainable goal. I think it’s going to be extremely challenging,” said Claire Hannan, executive director of the Association of Immunization Managers.

While a pace of 1 million doses a day is “somewhat of an increase over what we’re already doing,” a much higher rate of vaccinations will be necessary to stem the pandemic, said Larry Levitt, executive vice president for health policy at KFF. (KHN is an editorially independent program of KFF.) “The Biden administration has plans to rationalize vaccine distribution, but increasing the supply quickly” could be a difficult task.

Under the Trump administration, vaccine deployment has been much slower than Biden’s plan. The rollout began more than a month ago, on Dec. 14. Since then, 12 million shots have been given and 31 million doses have been shipped out, according to the Centers for Disease Control and Prevention’s vaccine tracker.

This sluggishness has been attributed to a lack of communication between the federal government and state and local health departments, not enough funding for large-scale vaccination efforts, and confusing federal guidance on distribution of the vaccines.

The same problems could plague the Biden administration, said experts.

States still aren’t sure how much vaccine they’ll get and whether there will be a sufficient supply, said Dr. Marcus Plescia, chief medical officer for the Association of State and Territorial Health Officials, which represents state public health agencies.

“We have been given little information about the amount of vaccine the states will receive in the near future and are of the impression that there may not be 1 million doses available per day in the first 100 days of the Biden administration,” said Plescia. “Or at least not in the early stages of the 100 days.”

Another challenge has been a lack of funding. Public health departments have had to start vaccination campaigns while also operating testing centers and conducting contact tracing efforts with budgets that have been critically underfunded for years.

“States have to pay for creating the systems, identifying the personnel, training, staffing, tracking people, information campaigns — all the things that go into getting a shot in someone’s arm,” said Jennifer Kates, director of global health & HIV policy at KFF. “They’re having to create an unprecedented mass vaccination program on a shaky foundation.”

The latest covid stimulus bill, signed into law in December, allocates almost $9 billion in funding to the CDC for vaccination efforts. About $4.5 billion is supposed to go to states, territories and tribal organizations, and $3 billion of that is slated to arrive soon.

But it’s not clear that level of funding can sustain mass vaccination campaigns as more groups become eligible for the vaccine.

Biden released a $1.9 trillion plan last week to address covid and the struggling economy. It includes $160 billion to create national vaccination and testing programs, but also earmarks funds for $1,400 stimulus payments to individuals, state and local government aid, extension of unemployment insurance, and financial assistance for schools to reopen safely.

Though it took Congress almost eight months to pass the last covid relief bill after Republican objections to the cost, Biden seems optimistic he’ll get some Republicans on board for his plan. But it’s not yet clear that will work.

There’s also the question of whether outgoing President Donald Trump’s impeachment trial will get in the way of Biden’s legislative priorities.

In addition, states have complained about a lack of guidance and confusing instructions on which groups should be given priority status for vaccination, an issue the Biden administration will need to address.

On Dec. 3, the CDC recommended health care personnel, residents of long-term care facilities, those 75 and older, and front-line essential workers should be immunized first. But on Jan. 12, the CDC shifted course and recommended that everyone over age 65 should be immunized. In a speech Biden gave last week detailing his vaccination plan, he said he would stick to the CDC’s recommendation to prioritize those over 65.

Outgoing Health and Human Services Secretary Alex Azar also said Jan. 12 that states that moved their vaccine supply fastest would be prioritized in getting more shipments. It’s not known yet whether the Biden administration’s CDC will stick to this guidance. Critics have said it could make vaccine distribution less equitable.

In general, taking over with a strong vision and clear communication will be key to ramping up vaccine distribution, said Hannan.

“Everyone needs to understand what the goal is and how it’s going to work,” she said.

A challenge for Biden will be tamping expectations that the vaccine is all that is needed to end the pandemic. Across the country, covid cases are higher than ever, and in many locations officials cannot control the spread.

Public health experts said Biden must amp up efforts to increase testing across the country, as he has suggested he will do by promising to establish a national pandemic testing board.

With so much focus on vaccine distribution, it’s important that this part of the equation not be lost. Right now, “it’s completely all over the map,” said KFF’s Kates, adding that the federal government will need a “good sense” of who is and is not being tested in different areas in order to “fix” public health capacity.