Beyond Toxics Takes Pesticide Fight to the CDC and the EPA

The group is concerned about an aerial spraying in Gold Beach they believe sickened 24 people – and is fighting for tighter restrictions on chemicals in toys and, pesticides linked to the decline of bee populations
By:
Christen McCurdy 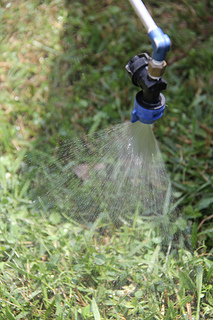 Beyond Toxics – the 14-year-old advocacy group that fights for increased disclosure of dangerous chemicals in consumer products – is looking at 2014 with a broadened focus and a fight they've taken to the federal government.

Late last year, the group learned that in Gold Beach, 24 people became sick on the same day after pesticides were sprayed on the area. A horse went blind, says Beyond Toxics executive director Lisa Arkin. “People are reporting coughing up blood, blurred vision, severe headaches, bloody noses,” Arkin said. “There's a chronic fatigue situation like they've never had before. It's been going on since October, and everybody's still sick.”

Beyond Toxics has since filed a petition, on behalf of the people of Gold Beach, to the Centers for Disease Control and Prevention and the Environmental Protection Agency calling for an investigation into the cause of the illness and a moratorium on the use of aerial pesticides in the area.

“The petition was accepted and is being acted upon by federal agencies,” Arkin said.

She said the petition was spurred by the fact that state agencies hadn't responded to the group's request for more information, including which pesticides were being sprayed in the area, information that doctors and nurse practitioners have been requesting to no avail.

“It's unconscionable that almost four months after poisoning doctors still can't get information. This is a very secretive process, and no one understands why the secrecy. The state should be supportive and helpful to medical professionals, not obstructionist,” Arkin said. “The DEQ had not even been called in to take water samples. People were drinking bottled water. No agency has been called in to take tissue samples from these dying animals. The lack of a procedure is shocking. The lack of a procedure to determine who's responsible is shocking and lacking.”

Beyond Toxics intends to advocate for improved disclosure regarding aerial pesticide spraying in the 2015 legislative session. Currently, the Department of Agriculture is investigating the complaints, but Arkin feels the process is moving too slowly and the state needs to put procedures in place to prevent such incidents.

The group – which merged with Rachel's Friends Breast Cancer Coalition, a nonprofit created in 1998 devoted to reducing exposure to environmental carcinogens last summer – is also keeping a close eye on the state legislature currently in session. A bill requiring disclosure of the presence of toxic chemicals in children's toys passed out of committee earlier this week.

Beyond Toxics is also advocating for House Bill 4139, also called the Save America's Pollinators Act (), which would require the state to develop educational materials for pesticide professionals on safer practices to protect bees. The bill went before the House Agriculture and Natural Resources Committee yesterday.

Arkin said the bill is “watered down” somewhat – an earlier draft placed restrictions on who could use neonicatinoids, which have been linked to rapidly declining bee population, and is critical to food production nationwide.

“Much of Oregon's economy is based on food production. Apples, pears and plums would go into a tailspin if there were not bees to pollinate these trees,” Arkin said.

She's hopeful that next year, the state will be able to adopt tighter restrictions on the use of pesticides – and that federal action will bring about a better sense of what happened in Gold Beach.

To learn more about the work of Beyond Toxics, click here.

Image for this story by UGA College of Ag (CC BY-NC 2.0) via Flickr.