A consensus bill forged by Sen. Alan Bates should now become law, setting up a new board to license applied behavioral analysts and taking steps to phase in a critical autism treatment for the Oregon Health Plan, public insurance and private insurance.
By:
Christopher David Gray 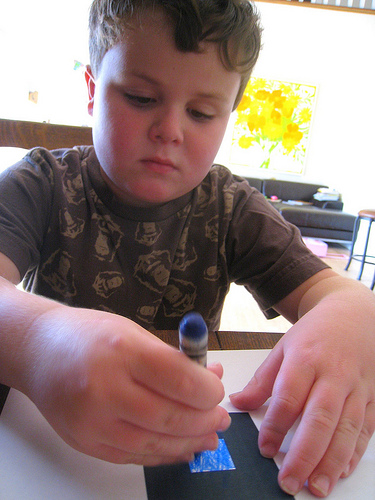 July 1, 2013 — The House and the Senate have unanimously approved the landmark autism bill that Sen. Alan Bates, D-Medford, ushered toward a consensus agreement between child advocates and health insurance companies. The bill paves the way for all public and private health plans to cover applied behavioral analysis over the next three years.

“Insurers want this bill because it gives them certainty and allows them to control rates,” Bates told the Committee on Ways & Means last week.

The Senate passed Senate Bill 365 on a special Saturday session and the House suspended its rules to pass the bill immediately on Monday. Normally, the House would have had to wait a day, but they rushed the bill through as the Legislature moves to end its work for the year as soon as Wednesday.

If Senate Bill 365 becomes law, the act will be rolled out in four stages. First, the psychological therapy will be fast-tracked before the Health Evidence Review Commission, which will determine whether applied behavioral analysis should be approved for the Oregon Health Plan. This should take about eight months, according to Shane Jackson, the lobbyist for Autism Speaks.

Next, a new Behavior Analysis Regulatory Board will be created to oversee the profession and ensure only legitimate therapists are practicing the therapy. Bates said setting up the board and requirements for analysts would take about 18 months.

“We have to set up a credentialing committee,” Bates told The Lund Report. “We want this focused on kids who really need it, and we want the right people doing ABA.”

Currently, because most insurance companies don’t cover the autism treatment, the state has the fewest applied behavioral analysts per capita at about 30 professionals, according to Jenny Fischer, an analyst at Cascade Behavioral Intervention in Bend.

“We’re going to need to really build up that number,” Fischer told The Lund Report. “It’s important that there be qualified professionals providing these services.”

Two colleges offer the necessary master's level program in applied behavioral analysis, the Oregon Institute of Technology and one recently developed at the University of Oregon. Some psychologists have also received special training in the practice during their education. Several other schools would like to offer the coursework, but without a way to pay for it, there hasn’t been a market for their work, even as parents have sought the treatment for their children.

Third, the Public Employees Benefit Board and all Oregon Educators Benefit Board plans will begin covering applied behavior analysis at the start of 2015. Educators with Kaiser Permanente health insurance already have it covered.

Lastly, and most significantly, all private insurance plans must carry analysis for autism as an essential health benefit by the start of 2016.

The unanimous vote on a sleepy Saturday session of the Oregon Senate belied the tremendous controversy and work that went into the passage of SB 365.

For two sessions, health insurance companies successfully defeated the efforts of autism advocates to require this groundbreaking coverage for Oregon children. As recently as April, Regence BlueCross BlueShield lobbyist Tom Holt publicly derided applied behavioral analysis as “experimental” and said Regence should not be required to pay for it.

Providence Health Plan is fighting a class-action lawsuit rather than be forced to cover the treatment, which can mean the difference between a life spent in special education and a mainstream classroom for some children.

“It helps some kids who need our help to have more productive lives,” Bates said.

Kaiser Permanente, the only insurance company to voluntarily cover applied behavioral analysis, did so only after losing a string of battles with the state Insurance Division over coverage when its own doctors prescribed the treatment but it refused to pay.

Sen. Chris Edwards, a Eugene Democrat, and father of an 11-year-old son with autism, led earlier efforts to require insurers to cover the treatment, and was appointed four years ago to the Oregon Commission on the Autism Spectrum Disorder by Gov. Ted Kulongoski.

“For so many kids it’s the right approach,” Edwards told The Lund Report, although he said applied behavioral analysis ultimately was not chosen for his own son.

Edwards handed the legislative baton to Bates after the 2011 session, and the osteopathic physician has worked doggedly to advocate for the children who could be helped by the treatment for the past 18 months, including at least 30 hours with legislative counsel this spring.

“I’m very proud to be in the same chamber as he is because of his work on this bill,” said Sen. Mark Hass, D-Beaverton, praising Bates to his Senate colleagues.

Jackson of Autism Speaks told The Lund Report his organization approved of the compromise structure of the bill, which was altered after the Senate Health Committee passed an earlier version of SB 365 in April. But he did acknowledge that the gradual implementation of autism coverage will put thousands of children’s lives on hold who could be helped now if their family’s health insurance plans covered the therapy.

The delay was partly necessary for the insurance companies to drop their opposition to SB 365. Some in the insurance industry have argued that under the Affordable Care Act, the state of Oregon will have to subsidize them for the coverage, since the act otherwise forbids any new mandates.

Bates, Sen. Laurie Monnes Anderson, D-Gresham, and autism advocates have argued it’s not a new mandate since the standard health plan in Cover Oregon, sold by Pacific Source, has covered the treatment for some children. But Pacific Source is covering this under a court-order, not as a voluntary decision, and so the health insurer has argued that it does not count as an existing benefit.

Bates said legislative counsel and the Oregon Department of Justice have offered differing opinions over whether the state can require the coverage without a subsidy. Thirty-two other states do require applied behavioral analysis in some form for autism as an essential health benefit, according to Autism Speaks.

If the state is forced to pay the insurance companies to cover the treatment, Bates said it will be very difficult to find money in the general fund to do so. Pushing the implementation to 2016 should give enough time for the legal question to be resolved.

Bates said the state also needs time to license a professional pool of psychologists and behavioral analysts to work with autistic children before the public health insurance carriers should be required to cover the treatment.

Image for this story by Shannon Rosa (CC BY-NC-ND 2.0) via Flickr.