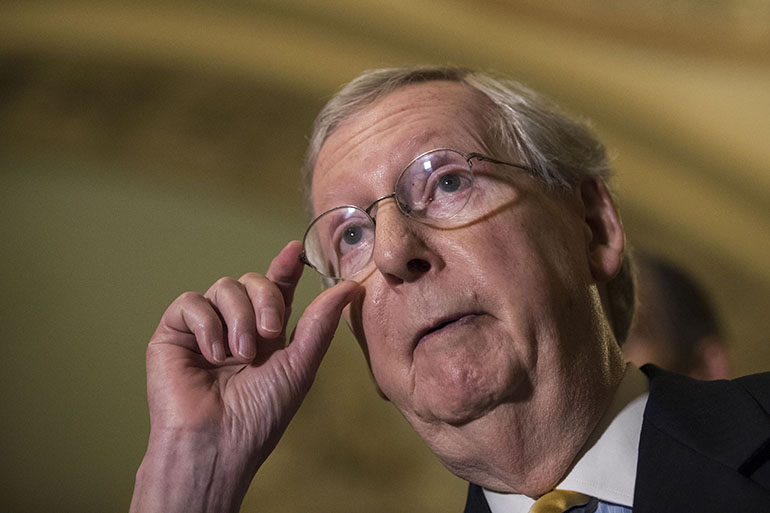 Senate Majority Leader Mitch McConnell is well aware of the political peril of taking health benefits away from millions of voters. He also knows the danger of reneging on the pledge that helped make him the majority leader: to repeal Obamacare.

Caught between those competing realities, McConnell’s bill offers a solution: go ahead and repeal Obamacare, but hide the pain for as long as possible. Some of the messaging on the bill seems nonsensical (see: the contention that $772 billion squeezed out of Medicaid isn’t a cut). But McConnell’s timetable makes perfect sense — if you are looking at the electoral calendar.

Here are a few key dates in McConnell’s “Better Care Reconciliation Act” (BCRA) that seem aimed more at providing cover for lawmakers than coverage for Americans:

2019: First major changes and cuts to the Affordable Care Act exchanges happen after the 2018 midterm cycle, allowing congressional Republicans to campaign on a “fixed” health system, even though Obamacare is still largely in place next year.

2019: States share $2 billion in grants to apply for waivers under a much looser process through this fiscal year. These waivers could allow insurers to sell skimpy plans that have low price tags but don’t take adequate care of people with preexisting conditions. None of those waivers has to go into effect, however, until after 26 Republican governors face re-election in 2018.

2020: Stabilization cash that makes the markets more predictable and fair for insurers flows through the congressional midterm cycle and the 2020 presidential cycle. Then it disappears. Medicaid expansion funds hold steady through this crucial political window, too.

2024: States enjoy their last few sips of Medicaid expansion cash at the end of 2023 — just as, perhaps, a second Republican presidential term is ending.

2025: The bill changes the formula for the entire Medicaid budget (not just the Obamacare expansion), dramatically reducing federal funding over time. That starts eight years and two presidential election cycles from now.

McConnell insists everything about the bill has been aboveboard and transparent.

“Nobody’s hiding the ball here. You’re free to ask anybody anything,” McConnell said on June 13.

But he and his working group did literally hide the bill from Democrats and most Republicans, crafting it behind closed doors until there was just a week left before his goal to secure a vote on it. (That timing was thrown off Tuesday with the announcement the vote was delayed, but the dealmaking is just beginning.)

One is a stipulation that compels the federal government, for two years, to pay the cost-sharing reduction payments to insurance companies that President Donald Trump has threatened to end. The payments are part of the Affordable Care Act, and they flow to insurers on behalf of low-income marketplace customers to cover their out-of-pocket health expenses. Republicans had sued to stop the payments, adding considerable instability to ACA marketplaces next year. McConnell ends that uncertainty for two years.

On top of that cash infusion, the BCRA proposes a “Short-Term Stabilization Fund” that would also aim to help lower premium costs and could attract a few more insurers into counties that are sparsely covered now. It would dish out $50 billion to insurers — $15 billion per year in 2018 and 2019 and $10 billion per year in 2020 and 2021.

The money would make up for the billions that the Republican-led Congress has refused to appropriate for insurance companies under the ACA’s risk corridors program. Risk corridors aimed to offset losses for insurers whose costs were more than 103 percent of expected targets. Congress has so far paid only 12.6 cents on the dollar of those obligations and faces lawsuits from insurers that were stiffed.

In short, the two pots of money would go a long way toward addressing the instability in Obamacare created by the Republican-led Congress, but only through the next presidential cycle in 2020.

Perhaps the key claim is that the Senate bill would increase access to insurance. It might, in that insurance companies in states that waive standards would be free to offer much cheaper plans. But those plans would be cheaper because they wouldn’t cover essential health benefits or adequately cover preexisting conditions. Lower-income Americans might be able to buy a plan — possibly a $6,000 deductible for someone who makes less than $12,000 a year.

A spokesman for McConnell did not answer a request for comment. But Democrats are keenly aware of the electoral machinations in the bill.

“Everything about this legislation, from the process to the effective dates of many of the provisions, is driven by political expediency,” said Brian Fallon, a Democratic consultant and former lead spokesman for Hillary Clinton’s campaign. “Mitch McConnell only cares about getting the ‘win,’ not about the substance of the bill.”

Senate Democratic aides who spoke on background were not sure that the steps the bill takes to shore up markets for the next two elections would work when insurance companies can see what lies ahead. But they agreed the timing and short-term fixes might help McConnell twist the arms of reluctant Republican senators.

“I think it will be enormously helpful to McConnell in a room with a moderate Republican who wants to be told, ‘Hey, a lot of this stuff that’s going to happen in this bill that you’re hearing about, that’s worrisome is past your re-elect, it’s past 2018, it’s past 2020,’” one senior aide said. “‘Just vote for it, it’ll be fine, we’ll figure the rest out later.’”

Democrats said McConnell’s hide-the-ball strategy will not work with voters, and they want Republican senators to know that before they vote.

“The polling already shows that, based on the fact that they control every aspect of government, Trump and the Republicans own everything that happens from now on in the health care system,” Fallon said.

Sen. Patty Murray (D-Wash.), the top Democrat on the Health, Education, Labor and Pensions Committee who has the task of leading the arguments against the GOP bill, thinks senators will imperil their political futures if they buy McConnell’s arguments.

“Sen. McConnell is doing everything he can to persuade Senate Republicans that Trumpcare won’t be devastating for the people they serve, but the facts are that Trumpcare is going to cause families to pay more, gut Medicaid, and take coverage away from millions of people,” Murray said. “Any Senate Republican who votes for Trumpcare and believes patients and families won’t hold them accountable is being sold a bill of goods.”

Still, McConnell knows how to work a legislative calendar. Expect a July full of closed-door dealmaking with reluctant senators, leading up to maximum leverage before the August recess.