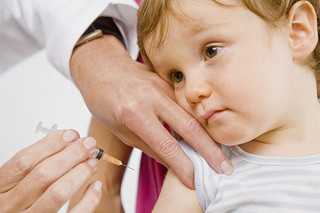 As public health officials work to tamp down a measles outbreak in the Portland metro area, Oregon lawmakers are preparing to take up legislation that would increase the number of children vaccinated for the disease.

State Rep. Mitch Greenlick, D-Portland, confirmed to OPB on Thursday that he’s ordered up a bill to eliminate a provision of Oregon law that allows parents to forego vaccinations for their kids because of religious or philosophical reasons.

“What’s happening in Vancouver [Washington] has made so clear how much of an important issue this is,” said Greenlick, chair of the House Committee on Health Care. He added that measles cases in the Portland and Vancouver area “could go to 100 or more. In fact, I suspect it will.”

Health officials said the outbreak of the highly contagious disease is only possible because of low vaccination rates in the Pacific Northwest. Around 7.5 percent of Oregon kindergartners are unvaccinated, according to the Oregon Health Authority — the highest rate in the country. Experts say an immunization rate of roughly 93 percent is necessary for a population to achieve “herd immunity” for measles.

Greenlick said he’s long opposed a state policy that allows parents to skip out on vaccinations for non-medical reasons once they view online educational materials or talk to a doctor. Removing the exemption would be a controversial move in an age where some parents distrust vaccines. But Greenlick said he thinks his fellow lawmakers may be especially open to killing non-medical exemptions with an active public health crisis playing out.

“It’s still not gonna be easy,” Greenlick said. “There are a lot of people who are very much concerned and I would say to them: They have every right to make a bad decision in the health of their child, but that does not give them the right to send an unprotected kid to public school. So if they want to homeschool their kid and keep them out of other environments, that’s their decision.”

Gov. Kate Brown, who has increasingly called on parents to vaccinate their children, suggested earlier Thursday that she’s open to legislation like Greenlick is preparing.

Lawmakers last considered altering the non-medical exemption policy in 2015. That bill faced pushback and died in committee after a single hearing.

Greenlick said he expects he’ll have a copy of his bill to pass around to other lawmakers within days, and that it will attract a bevy of co-sponsors.

Asked whether he thought Republicans would join in, Greenlick said: “I hope it’ll be bipartisan. Republican kids are just as vulnerable to this as Democratic kids are.”

I was at the hearing back in 2015, and it was a charade by the anti-vaxxers lead by 2 chiropractors.  Listening to the anti-science, conspiracy rubbish was difficult to listen to.

Our legislative leaders in Oregon, particularly my Democratic Party, speak about making Oregon the healthiest state in the country.  Here is an opportunity to put their "money where their collective mouths are" and do what's right for our state.  Also, Dr. Greenlick has a PhD in Epidemiology.  He understands science.

Oregon legilators should use the California mandate as a template.  It requires vaccination to also attend both public and private schools.   The Oregon Health Aurthority school stats show the greatest danger and lowest vaccination rates are in private schools and day cares.   They also found in California that physician approved exemptions needed to be restricted to legitimate and recognized contraindications to vaccination.  Phony reasons and diagnoses were distressingly common.