Although Smoking Has Declined, Its Consequences Continue, Study Finds

According to a study published Monday in the journal JAMA Internal Medicine, almost half of the 346,000 deaths from 12 different types of cancers in individuals 35 years of age or older in 2011 were attributable to smoking cigarettes.
By:
Alana Pockros, Kaiser Health News 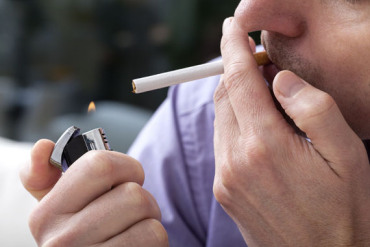 Smoking has long been associated with increased risks of cancer, but a research team has now estimated the number of deaths from a wide variety of cancers that are linked to cigarette use.

According to a study published Monday in the journal JAMA Internal Medicine, almost half of the 346,000 deaths from 12 different types of cancers in individuals 35 years of age or older in 2011 were attributable to smoking cigarettes.

The authors cited the 2014 U.S. Surgeon General’s Report as a preface to their study, which provided estimates on the annual number of smoking-related deaths from cancer overall and from lung cancer specifically between 2005 and 2009.

Although other studies have looked at lung cancer deaths related to smoking, the researchers wrote that this was the first study to delineate the number of deaths from 11 other cancers that were associated with cigarettes.

The study was led by Rebecca L. Siegel of the Intramural Research Department at the American Cancer Society.

Siegel and her team demonstrated that smoking behavior as well as the correlation between smoking and cancer have changed over time. Between 2000 and 2012, the number of people who smoked decreased from 23 to 18 percent and the number of deaths for most types of cancer tied to smoking has also fallen.

Despite these positive statistics, the risk for cancer in individuals who smoke may increase over time.

“The bottom line is that despite 50 years of declining smoking prevalence, almost 170,000 cancer deaths each year are still caused by smoking,” Siegel said.

So the researchers sought to define the magnitude of risk for each of the different types of cancer.

Not surprisingly, of the 12 cancers studied in relation to cigarette smoking, lung, bronchus, and trachea cancers were found to be the most closely associated with this habit. However, half of the deaths from oral cavity, esophagus, and urinary bladder cancers were attributed to smoking as well.

The researchers concluded that to reduce the rates of cancer mortality caused by smoking behavior, there needs to be more extensive control of tobacco.

The best way to accomplish this goal, in Siegel’s opinion, is to “focus targeted tobacco control on groups that are most likely to smoke,” such as low-income people, gay and lesbian populations, and residents of Southern states known for tobacco production.