All Of Oregon Coast Now Classified As 'Extreme Risk' 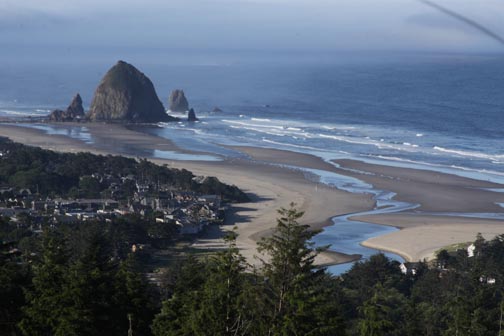 Gov. Kate Brown announced Tuesday that 29 of the state’s 36 counties are now at “extreme risk” of COVID-19 spread, a development that will bring added restrictions this week to several coastal counties.

Two weeks ago, the state classified 25 counties as extreme risks of widespread coronavirus transmission, bestowing the highest of four risk levels based on a number of factors, including their population and the level of community spread according to various metrics.

Five coastal counties – Tillamook, Clatsop, Lincoln, Coos and Curry –have all been elevated to the highest risk level after state data showed continued spread during the most recent two-week monitoring. The changes go into effect Dec. 18.

The entire Oregon Coast is now classified as an extreme risk, which means indoor dining will be banned and certain indoor businesses, like gyms and theaters, must close. Indoor religious services in those counties are also capped at 25% capacity or 100 people, whichever is smaller. The state recommends that services are limited to one hour. Indoor dining remains open for non-extreme counties, though even low risk counties such as Wallowa must cap occupancy at 50%.

Multnomah County saw some of its metrics improve, such as the percentage of positive cases dropping to 7.2% and total cases and per capita caseloads decreasing. However, the state’s most populous county’s positive case rate for the past two weeks remains at 498, more than twice the baseline metric for extreme risk. Washington county saw similar improvements, while Clackamas County saw its cases per 100,000 residents increase slightly, from 456.4 to 469.8.

“We continue to see community spread across Oregon to the point that the majority of the state needs to continue with strict health and safety measures,” Brown said in a statement. “Until we reduce the spread and have high participation in vaccination, all Oregonians need to follow the guidelines in place in their counties. I am also asking Oregonians to continue practicing the measures we know are effective in reducing the spread of COVID-19 — wear your mask, keep physical distance from others, avoid gatherings, wash your hands often, and stay home when you’re sick.”

The changes come as the first federally approved vaccines is set to debut in Oregon this week, with healthcare workers and long-term care residents expected to be the first to be immunized. A second vaccine, created by Moderna, is likely to be approved for emergency use Friday, according to The New York Times.

The risk levels released Tuesday include some shifts, such as rural Lake county being downgraded from extreme to moderate risk and Benton county shifting from high to extreme risk.

Grant and Harney counties were shifted to the lowest risk levels.

It’s not immediately clear how, or why, some smaller counties were reclassified this week. Oregon’s coronavirus website includes a table outlining various metrics for hitting each of the risk categories, but those run counter to the guidelines a state spokesman previously provided that said only case counts would be evaluated.

State officials didn’t answer questions about these discrepancies or whether the state changed its methodology for classifying counties, which it has done without explanation at least once before. The discrepancies appeared to impact at least three sparsely populated counties, suggesting officials made their decisions based on total cases.

This story was originally published by The Oregonian/OregonLive and is posted her through a content-sharing arrangement on coronavirus stories among a dozen Oregon media outlets.