Aid-In-Dying: Not So Easy 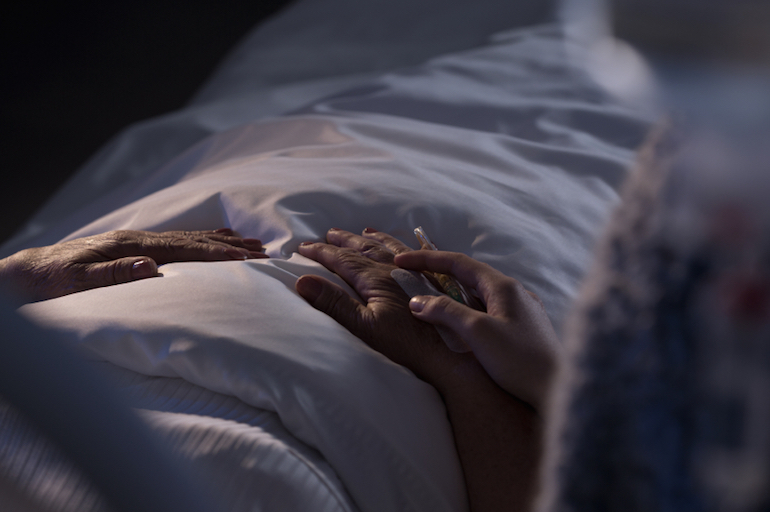 Starting June 9, terminally ill Californians with six months or less to live can request a doctor’s prescription for medications intended to end their lives peacefully.

If that sounds simple, it won’t be.

California’s End of Life Option Act creates a long list of administrative hurdles that both patients and their doctors must clear.

For instance, you must make multiple requests for the drugs, orally and in writing, and provide a written attestation within 48 hours of taking the medication (you must be able to take the drugs yourself, without help, to qualify).

Two doctors must confirm your diagnosis, prognosis and ability to make medical decisions, and you must prove you’re a California resident.

“This will not be an on-demand service,” says Sarah Hooper, executive director of the UCSF / UC Hastings Consortium on Law, Science and Health Policy.

“The patient has to jump through a lot of hoops before accessing the prescription. Those hoops are designed to ensure that the patient has really thought about this and is making the decision voluntarily.”

California will be the fifth state to implement an aid-in-dying law, and the Golden State’s version of it is considered the most stringent, says Sean Crowley, spokesman for the advocacy group Compassion & Choices.

Rather than list every requirement, I’m going describe a few potential challenges you might face if you or a loved one is considering asking for these medications — from doctors who are unwilling to write prescriptions to the cost of the medications themselves.

Let’s start with the doctors.

This law is voluntary “every step of the way,” says Democratic state Sen. Bill Monning, co-author of the law.

That means everyone — patients, physicians, health systems and pharmacies — gets to choose whether or not to participate.

Nothing requires patients to take the drugs once they have obtained a prescription.

Since Oregon implemented its law in 1997, more than one-third of people who obtained prescriptions didn’t take the medications, according to data compiled by the Oregon Public Health Division.

But before you can make that decision, you must first get a prescription — and that might take some doing. That’s because not all health care providers will be on board with the new law. It will be up to you to find the ones who are.

“Patients and families should expect that they will have to be a little proactive in asking questions and getting educated about their care,” Hooper says.

For instance, the Kaiser Permanente system will participate, and patients will be paired with a coordinator to guide them through the process, says spokeswoman Amy Thoma.

If your Kaiser Permanente doctor chooses not to participate, which is his or her right under the law, your coordinator will connect you with a physician who does, Thoma says.

But U.S. military veterans who receive health care from the U.S. Department of Veterans Affairs will have to look elsewhere for participating doctors, because federal law prohibits the use of federal money for such a purpose, Hooper says.

Nor will the 48 Catholic and Catholic-affiliated hospitals in California participate, including their doctors and staff, says Lori Dangberg, vice president of the Alliance of Catholic Health Care.

Dangberg insists that those providers will not abandon any patient who chooses to end his or her own life. “We will be with that patient and continue to care for that patient throughout their diagnosis and their dying process,” she says. “We just cannot participate in any action that would intentionally hasten a person’s death.”

If your doctor doesn’t participate, ask him or her to refer you to one who does. If your doctor won’t provide a reference, “call us and we can probably help,” says Crowley of Compassion & Choices. That number is 800-893-4548.

Another potential obstacle is the cost of the drugs. Your insurance might not cover them. California’s law does not require health insurers to cover the medications, Monning says.

In Oregon, Washington and Montana — states with aid-in-dying laws in place — some health plans cover the cost and some don’t, he says. He expects the same to occur in California.

Insurers “are currently working on how they will implement this law,” says Nicole Kasabian Evans of the California Association of Health Plans.

If you have questions about coverage, she suggests you contact your insurer directly.

Medi-Cal, California’s version of the federal Medicaid program for low-income residents, will cover the cost of the drugs without relying on any federal money, says state Department of Health Care Services spokeswoman Katharine Weir.

If affordability becomes an issue, Compassion & Choices again urges you to call. “We try to work with people to find a way for them to access the law, through any challenges,” Crowley says.

If you need more step-by-step guidance about the law, tap into these resources: