Part of the care includes an evidence based substance that turns teeth black.
By:
Shelby Sebens 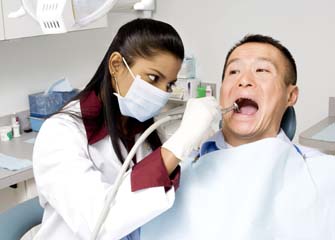 Advantage Dental is launching a landmark project next year to reduce unnecessary trips to the emergency room and provide children and pregnant women with a “dental home.”

Nonprofits and organizations go into schools and community gatherings but lack the follow through, said Peter Milgrom, professor of oral health sciences and pediatric dentistry at the University of Washington.

PREDICT is being evaluated by a University of Washington team with support from the “Reducing Health Care Disparities Through Payment and Delivery System Reform” program administered by the University of Chicago and funded by the Robert Wood Johnson Foundation.

“The key to improving dental health is to redirect scarce resources to clients with the highest risk while being sure that every child, adolescent or pregnant woman has a ‘dental home’ and accessible ongoing care,” according to Mike Shirtcliff, president of Advantage.

Instead of using traditional treatments, which might not be needed, those children who have a high risk for tooth decay will get evidence-based treatments such as silver diamine fluoride.

“Just because you live in a poor neighborhood doesn't mean you’re going to get tooth decay,” Milgrom said.

The silver diamine fluoride is less expensive, less invasive and painless, meaning more children can be treated. It’s painted on the cavity to prevent decay, turning those teeth brown or black, and doesn’t require further treatment. Later, their baby teeth will fall out.

To monitor the health of children and adults, all the data will be entered into a computer software program developed by Advantage.

“That child will get care on an ongoing basis,” Milgrom said. If the patient is not a member of Advantage, their information will be sent to their provider.

Some nonprofits do provide community care and make visits to schools. But Advantage officials argue children are often lost in the mix after having one cleaning.

The push to get better care for low-income children comes after studies have shown many end up in the emergency room where the care is much more expensive.

“What’s evolved is a bunch of Band Aids,” Milgrom said with a “hodgepodge of non-profits and state programs trying to fill in the gaps.”