In addition to Multnomah County’s upcoming assessment, environmental and health groups are calling for an investigation of the regional impacts of coal dust
By:
Christen McCurdy

October 3, 2012 -- Activists from Oregon environmental groups, health organizations, Indian tribes and neighborhood associations have been questioning increased coal exports ever since they got word that energy companies were applying for permits with ports in the region. They asked the Oregon Health Authority to perform a comprehensive regional health impact assessment, as well as an environmental impact statement to research the effects of coal dust and diesel exhaust as trains and barges travel through the region. 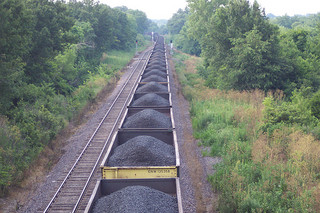 The state has demurred, waiting for an environmental assessment from the Army Corps of Engineers before it investigates further. But Multnomah County has taken action, following a request from chair Jeff Cogen to perform a health impact assessment and report its findings later this month.

“I don't think the county is capable in the time that it's been given to do this study, but there's a lot that they can do,” said Regna Merritt, coal campaign director for Oregon Physicians for Social Responsibility.

While there is more data regarding the occupational effects of coal dust and its link to serious respiratory disease in miners, so far the effects of coal dust on people who live near freight lines or in mining communities have not been the subject of much study. Still, there is data that public health officials can use to extrapolate possible outcomes, knowing the effects of coal and the heavy metals it contains – which include lead, arsenic, mercury and uranium – on the health of community members.

In addition to looking at existing data regarding the impact of coal dust on a community's health, Merritt said, officials could look at the impact of coal trains already passing through the area – or just recommend that better monitoring be implemented so more data can be gathered.

“What's clear is that there are not sufficient numbers of monitoring sites,” Merritt said, so officials may recommend that more sites be established along shipping routes.

Howard Shapiro, who volunteers with the Sierra Club's Beyond Coal campaign, said he and other activists are concerned about derailments, since uncovered trains can put out up to a pound of dust per car per mile, according to a BNSF Railway study that said coal dust is more likely to settle and cause derailments. In addition to causing fatalities, coal dust is often left in place following an accident, he said.

“We have gone out and looked at some of the derailments and seen how the coal companies cleaned them up,” Shapiro said. “The toxic coal is still sitting there.”

Merritt hopes to see a subsequent, more comprehensive and regionally based health impact assessment that would not just focus on Multnomah County, but on other areas through which coal would be traveling – particularly areas like the Columbia Gorge, which would be the center of several coal transport projects with pending permits.

A truly comprehensive health impact assessment would also take into account the effects of burning coal in China on the local environment – not to mention climate change, Merritt said.

Laura Stevens, associate field organizer for the Sierra Club's Beyond Coal campaign, said her organization has also been concerned about the fact that no public hearings have been held to discuss pending export projects, and neither energy companies nor the government have been transparent about the issue.

“We haven't had any public hearings on this. We need public input and full transparency on what this means for Oregonians,” Stevens said.

One export project – Ambre Energy's Morrow Pacific Project, which would ship 18.8 million tons of coal mostly via barges on the Columbia River – is up for public comment. The comment period ends October 31.

Image for this story by Scott Granneman (CC BY-SA 2.0) via Flickr.