Abortion Access In Oregon And Washington Won’t Change, Unless State Law Does 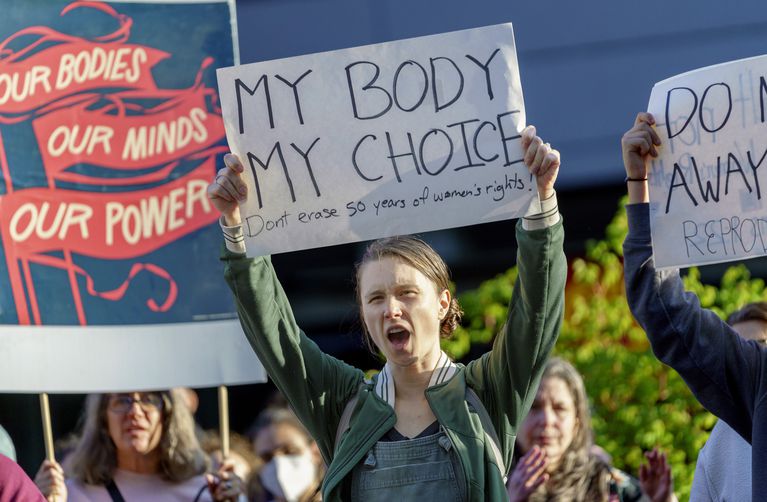 Hundreds rallied across Oregon in support of abortion access on Tuesday, responding to the leaked U.S. Supreme Court draft regarding Roe v. Wade. But in Oregon and Washington, the decision, even if it becomes law, will make little difference to abortion access./Kristyna Wentz-Graff/OPB

Because reproductive health access in Oregon is governed by laws enacted by its state Legislature, rather than by a court’s interpretation of the state constitution, a sudden change to those policies is unlikely, said Alison Gash, an associate professor of political science at the University of Oregon.

“I suspect that the Oregon Supreme Court would argue that their understanding of the state constitutional mandate is that it would protect a person’s right to choose to have an abortion,” said Gash, who studies law and social policy. “But that becomes largely unnecessary if the state legislative commitments continue to remain on the books.”

With a solid Democratic majority in the Legislature, and recent redistricting all but ensuring it will remain that way, it is unlikely that even the election of a Republican governor would change the state’s laws. Oregon state law, updated in 2017, allows for late-term abortion, requires private medical insurance and state Medicaid to cover abortion, and codifies the right to gender-affirming care, among other protections.

Access to reproductive care in Washington is similarly broad and guaranteed by law. Anyone seeking to receive an abortion in his state would be “welcome” and “safe,” said Gov. Jay Inslee at a rally for reproductive rights in Seattle on Tuesday.

Both states are already destinations for people from more restrictive states who have access to all the resources needed to travel to receive abortion care. Reproductive rights advocates expect those numbers to rise if the leaked decision becomes law, especially because Idaho’s law banning most abortions after six weeks would go into effect. Idaho’s law also allows for civil suits against people providing abortions or assisting someone to receive an abortion.

“That could be charged to people who may be…providing travel to and from where access is available in other states and is unfortunately something that we know it’s going to have a chilling effect and lead to mass confusion,” said Christel Allen, the executive director of Pro-Choice Oregon, which advocates for legal protections for reproductive health care.

Wyoming and Utah are also expected to enact stricter laws, or even complete bans, if the decision leaked on Monday becomes law.

That would mean that as many as 320,000 women of reproductive age could soon be looking to Oregon as the closest place to access an abortion, according to the Guttmacher Institute, a research and policy organization that advocates for reproductive health. The increase for Washington could be 100%. A new unrestricted fund for reproductive health equity in Oregon sets aside $15 million to cover costs for abortion providers and patients without insurance coverage or traveling from out of state.

Despite the region’s status as a place where reproductive choices are broadly protected, Allen said not everyone in Oregon and Washington has equal access to abortion care.

For example, Oregon law requires private insurance to pay for abortion but allows religiously based health care plans to withhold payment for the procedure. A primary example is the coverage provided by the Providence health care system, which has Catholic roots. Providers with close ties to religions that hold abortion to be morally wrong cannot be compelled to provide abortions, either.

Parts of Eastern Oregon are also underserved by medical providers willing to provide abortions. Only one Planned Parenthood Clinic is currently in operation east of the Cascades and St. Adolphus, which provides much of the hospital-type services in the region, does not offer abortions. Oregonians enrolled in federal health insurance plans, including many federal employees, those covered by Veterans Affairs, and those enrolled in the Indian Health Service, also lack insurance coverage for abortion.

Rachel Brodeur, a member of the Tlingit Tribe, told a mostly white crowd gathered in Bend Tuesday to protest the leaked decision that she’d never had easy access to abortion because she gets her health care through the Indian Health Service.

“The same people who are worried about losing access to something, have no idea that it’s something that I’ve never had access to,” Brodeur said.

”While we have this momentum, while we are talking about it, can you please, please bring us with you?” she asked the crowd.

A significant minority in both states still believe that abortion is wrong and should be entirely prohibited. Anderson, from Right to Life Oregon, sees the likely direction of the U.S. Supreme Court as a welcome change to the nation’s legal framework.

“I think the most important outcome of this decision can be: ‘Let’s return this discussion and these decisions to their rightful place, which is in our states and with our elected officials who have the closest relationship to us,’” Anderson said. “That’s the proper place for us to be discussing and making decisions about these laws.”

Given the current political make up of their state legislatures, legal decisions in Oregon and Washington will likely continue to lead to policies like the ones currently in place.