1,400 Nursing Homes Get Lower Medicare Ratings Because of Staffing Concerns

Medicare lowered the ratings of one in 11 of the nation's nursing homes, about 1,400 facilities, because they didn't have enough registered nurses or failed to provide payroll data.
By:
Jordan Rau and Elizabeth Lucas 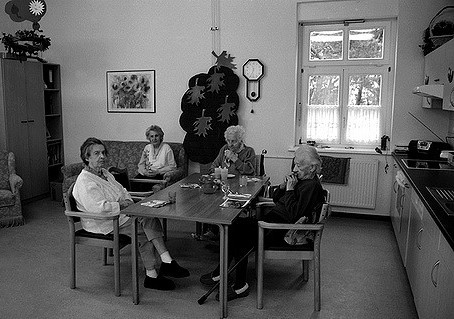 Medicare has lowered its star ratings for staffing levels in 1 in 11 of the nation’s nursing homes — almost 1,400 of them — because they either had inadequate numbers of registered nurses or failed to provide payroll data that proved they had the required nursing coverage, federal records released last week show.

Medicare only recently began collecting and publishing payroll data on the staffing of nursing homes as required by the Affordable Care Act of 2010, rather than relying as it had before on the nursing homes’ own unverified reports.

The payroll records revealed lower overall staffing levels than homes had disclosed, particularly among registered nurses. Those are the highest-trained caregivers required to be in a nursing home, and they supervise other nurses and aides. Medicare mandates that every facility have a registered nurse working at least eight hours every day.

“It’s a real positive that they actually are taking the payroll-based system seriously, that they’re using it to punish those nursing homes that either aren’t reporting staffing or those that are below the federal limit,” said David Grabowski, a professor of health care policy at Harvard Medical School. “Could they do more? Sure, but I think it’s a really good start.”

Nursing home industry officials have acknowledged that some facilities are struggling to meet the new payroll reporting requirements. Katie Smith Sloan, president of LeadingAge, an association of nonprofit providers of aging services including nearly 2,000 nursing homes, said the lowered star ratings were disappointing and attributed them largely to a workforce shortage.

“Our members are battling on multiple fronts to recruit and retain all types of qualified staff, and nurses in particular,” she said in a statement.

Medicare rates nursing homes on a five-star system, and the homes’ failures to either keep the facilities consistently staffed with registered nurses or to provide the data to prove they were doing so led the government to give its lowest rating for staffing to 1,387 of the nation’s 15,616 skilled nursing facilities, according to a Kaiser Health News analysis of the latest data released by Medicare. They all received one star out of a possible five on July 25, when Medicare updated its Nursing Home Compare website, replacing the first ratings based on payroll data issued in April.

In footnotes on the site, Medicare said those homes either lacked a registered nurse for “a high number of days” over three months, provided data the government couldn’t verify or didn’t supply their payroll data at all. The downgraded homes reported seven or more days without any registered nurses, the analysis found.

For roughly half of the homes, the downgrades lowered their overall star ratings, which are the measures displayed most prominently on the site. But some of the homes saw their overall ratings stay the same or even rise, buoyed by their scores on other quality measures. Seventy-nine are still rated with a coveted five stars.

While the Kaiser Health News analysis found substantially lower average staffing of nurses and aides at for-profit facilities than at nonprofits and government-owned homes, the number of downgraded nursing homes was roughly proportionally divided among the three categories, indicating an industry-wide issue with staffing by registered nurses in particular.

Medicare concedes that because the payroll system is geared toward reporting hourly work, salaried staff may not always be reflected correctly, especially if they were working overtime. But Medicare had warned the nursing homes in April that the downgrades would be coming if facilities continued to show no registered nurses on duty. The agency noted it has been preparing nursing homes since 2015 for the new payroll system.

“We’ve just begun to leverage this new information to strengthen transparency and enforcement with the goals of improved patient safety and health outcomes,” the Centers for Medicare & Medicaid Services said in a statement.

The new payroll data, analyzed by Kaiser Health News, showed that for-profit nursing homes averaged 16 percent fewer staff than did nonprofits, even after accounting for differences in the needs of residents. The biggest difference was in the number of registered nurses: At the average nonprofit, there was one RN for every 28 residents, but at the average for-profit, there was only one RN for every 43 residents. Researchers have repeatedly found lower staffing in for-profit facilities, which make up 70 percent of the industry.