When The 4-Year Plan Turns Into A 2-Year Scramble: Pierce's Run For Governor 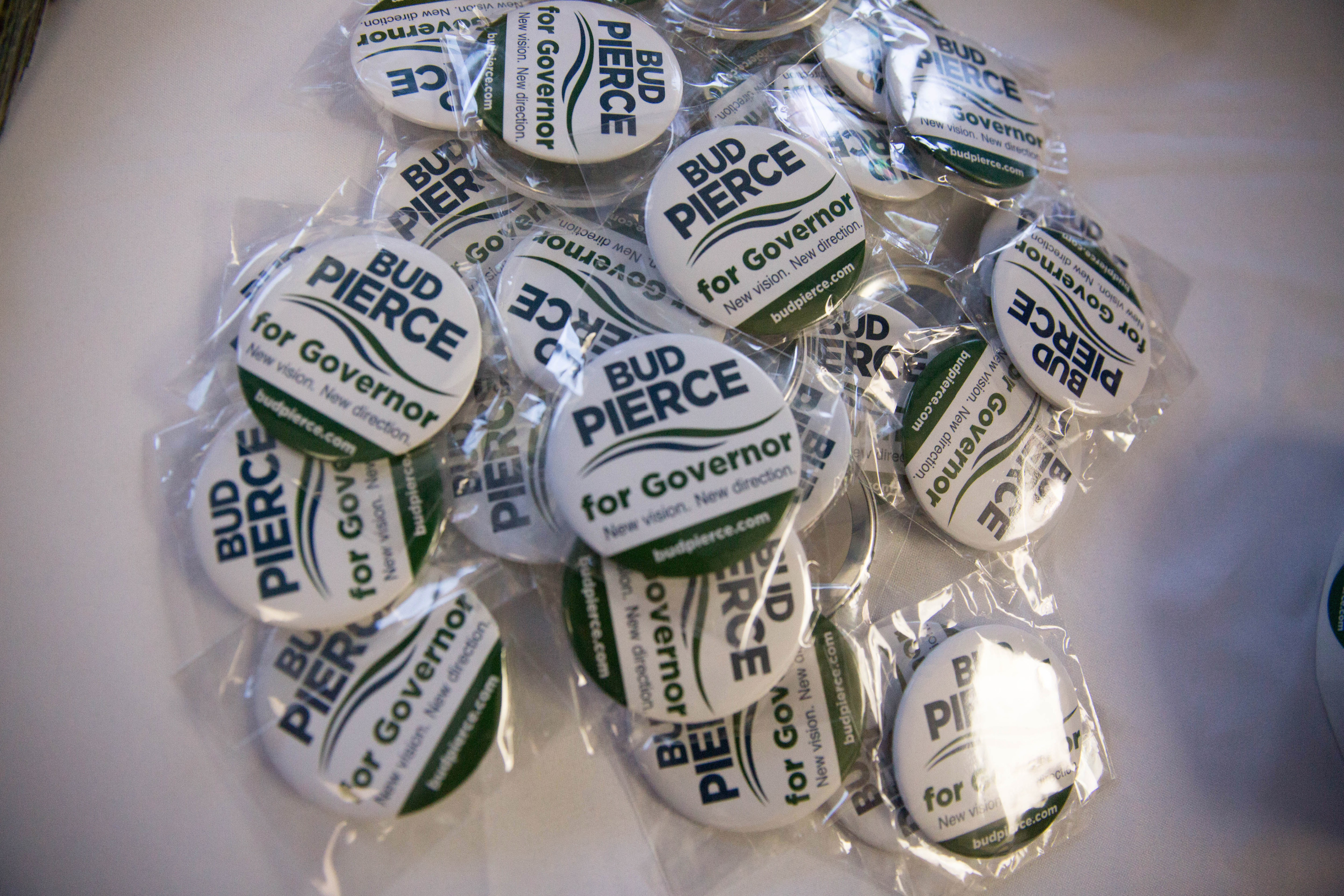 It's early September, and Bud Pierce is touring a Clackamas County non-profit that helps down-on-their-luck veterans. It's a cause near and dear to Pierce's heart. He's a former Marine Reservist himself. But as campaign stops go, this one won over relatively few voters. Just a handful of people were there, and there's not a single TV or newspaper camera around.

Pierce is a cancer doctor with a long-time practice in Salem. Until now the extent of his political involvement has been to chair the Oregon Medical Association. He wasn't planning to run for governor—not yet, anyway. He had his sight set on 2018, when the seat was supposed to next open. And then, in 2015, John Kitzhaber resigned.

"So that really sped it up," Pierce said.

The next gubernatorial election would be in 2016, instead. The winner would serve the remaining two years of Kitzhaber's term. For Pierce, that meant that what was going to be a four year plan to take the governor's office instead shifted into high gear.

"And so it really got rid of the first two years, which was the introduction to the state as someone who's interested in political office," he said. "So that part went away."

Pierce suddenly found himself criss-crossing the state, at first juggling campaign appearances with his ongoing medical work in Salem. His message has been that Democrats have controlled the governor's office for too long, and that his experience running a business—in his case, a medical practice—would give him the tools to make state government more efficient. He also thinks it's given him a different bedside manner, if you will, than a career politician.

"Just taking care of many thousands of patients and learning how to relate to people who have different backgrounds than you and different lives than you has really helped me in that way," Pierce said.

For the most part, Pierce is staking out traditional Republican positions on the issues. He said he would cut red tape on business, fight to regain state control over federal lands, and would try to repeal the new law that regulates the carbon content of motor vehicle fuels. He's also against Measure 97, which would increase taxes on companies with more than 25 million dollars in annual sales in Oregon.

Pierce handily won the Republican primary in May, but since then he's struggled to attract donors. He and his wife have pitched in more than a million dollars of their own money. But not enough to win a statewide election, according to Dan Lavey of Gallatin Public Affairs in Portland. Lavey has served as an advisor to Republican candidates in Oregon but isn't working with the Pierce campaign.

"You really gotta have the capacity to raise or spend a significant amount of money when you're taking on an incumbent politician," he said.

In 2010, Lavey served as an advisor to Republican gubernatorial nominee Chris Dudley. Like Pierce, Dudley was making his first run for elected office. Unlike Pierce, Dudley was a prodigious fundraiser. The former NBA player drew upon a vast network of donors to bring in more than $10 million.  Dudley's cash haul far outpaced that of his Democratic rival, John Kitzhaber, who raised just over $7 million during the 2010 election cycle. It wasn't enough for Dudley to defeat Kitzhaber, but the difference was less than two percentage points in an election where nearly 1.5 million Oregonians cast a vote for governor.

This year, both Pierce and incumbent Democrat Kate Brown have raised far less than their counterparts in 2010. Pierce has raised just over $3 million so far, with roughly half of those contributions coming from Pierce and his wife's personal checkbooks. Brown has raised about $4.5 million since becoming governor last year  in the wake of Kitzhaber's resignation. Brown has served in public office for more than 25 years. That experience is serving her well during this, her first campaign for governor, says Lavey. "Being a political candidate isn't something you just turn on and start doing on day one. It takes a lot of practice. It's a lot of hard work," he said.

Meanwhile, Pierce's lack of experience showed during a debate at the Portland City Club in the closing weeks of the race, at a time when more voters are paying attention. In response to a question about domestic violence, Pierce said this:

"A woman that has great education and training and a great job is not susceptible to this kind of abuse by men, women or anyone."

Pierce issued several apologies and calls his statement, quote, "ignorant and dangerous." But it didn't take long for Democrats to release a video featuring news coverage of Pierce's mis-step.

"The Republican candidate for governor drew boos at a Portland debate Friday. Pierce is taking some criticism this morning. Pierce earned boos from the crowd …"

It took Pierce more than a week to regain his footing, and a steady stream of polls shows him with a long way to go to catch up with Brown. Regardless of how this race turns out, it's definitely been a change of pace for him.

"I started medical school 40 years ago and I don't think I've been away from thinking about some aspect of medicine for more than two or three weeks since that time," Pierce said.

Pierce grew up in southern California, the son of a public school janitor and a homemaker. His parents named him William, but he became known as "Bud" at a very young age. "Bud Blattner was the color announcer of the California Angels," he said. "We were a big baseball family. I wanted to be a Major League Baseball player like every other kid. And my sister nicknamed be Bud, and it stuck."

Pierce says his first vote for president went to Jimmy Carter but over the years his political views shifted to the center. This year he initially endorsed Donald Trump but withdrew his support in September, citing a series of controversial statements from the Republican presidential nominee.

At 60 years old, Pierce said he'll go back to treating cancer patients if he loses the governor's race. And Republicans will go back to wondering what it takes to win the Oregon governor's office.