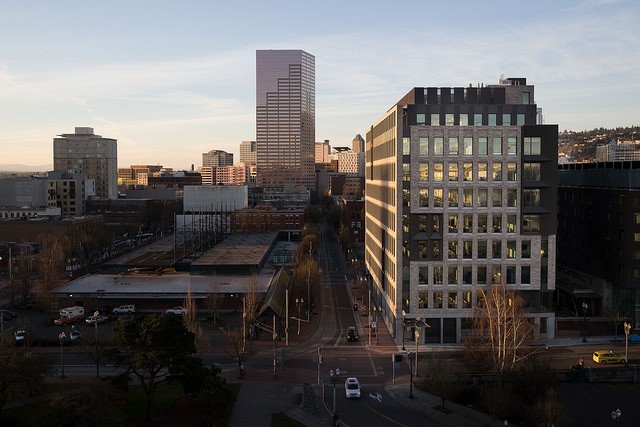 Multnomah County opens the new Gladys McCoy Health Department Headquarters Wednesday on one of the most iconic corners in Portland, across from Union Station in Old Town.

About 500 Health Department employees will move from 426 SW Harvey Milk St. into the new nine-story building at the west end of the Broadway Bridge at 619 NW Sixth Ave. The moves will take place over four weekends beginning April 5.

“The Health Department touches the lives of everyone in this county and we finally have a building that was designed, constructed and built to meet the needs of the staff and the people we serve,’’ Chair Deborah Kafoury said.

“We are fortunate to be able to support the Health Department’s mission to provide accessible, equitable and high-quality healthcare and health education for the Portland community,” says Gene Sandoval, design partner, ZGF Architects. “As a resilient 80-year building, the new headquarters enables the Health Department to serve Portland’s most vulnerable populations now and in the future. The facility invigorates its Old Town neighborhood and celebrates the optimism and hope that makes Portland unique, featuring an art program that showcases the beauty of the floral diversity in Oregon.”

The grand opening comes two years after general construction contractor JE Dunn broke ground and eight years after the County launched the project. With owner’s representative Shiels Obletz Johnsen, the County opens the building on time and under budget.

“The team employed almost 1,000 people with a peak of over 250 individual skilled trades men and women on site at one time working together to achieve this amazing building,’’ Tom Heger, vice president and project director for JE Dunn Construction. “With a tight footprint and a large workforce, it’s incredible what we were able to do together with collaboration and innovation at the heart of the project.”

The project was built on half a city block, constrained to the east by the light rail and 6th Avenue which prevented any road closures and a mere 11 inches from the Bud Clark Commons courtyard wall on the west. The JE Dunn team worked closely with neighbors to manage the site, especially Bud Clark Commons, where JE Dunn staff also volunteered with homeless services.

“To build such an iconic and important building only a few minutes from our local JE Dunn office was a really amazing opportunity and one we welcomed, challenges and all,’’ Heger said.

Brett Taute, who managed the headquarters project for the County, said the Gladys McCoy Building will receive a LEED Gold certification, providing energy and water efficiency along with access to natural light for staff well-being.  Much of the roof area is covered in eco-roof, helping to manage the stormwater runoff with native planting viewable on the 9th level. The building also features gender-neutral bathrooms, a wellness center and open office space.

“This modern facility will continue to serve generations of residents in Multnomah County as flexibility and durability were key elements in both the design and construction,’’ Taute said.

Chair Deborah Kafoury thanked the current and former Board of Commissioners for their support, and partners including the City of Portland Housing Bureau, which donated the land for the building and Prosper Portland, which provided $36.4 million in tax increment financing from the River District. Other financing included $13.4 million one-time-only County general fund dollars and $44.3 million in bond proceeds.