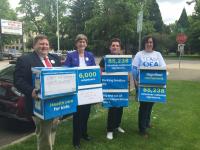 SALEM-The union-backed Our Oregon has surpassed the threshold for signatures required to place a corporate sales tax measure on November’s ballot.

The campaign has collected 130,000 signatures and plans to submit the last batch to the Oregon secretary of state’s office Friday, May 20, for verification, said Our Oregon spokeswoman Katherine Driessen.

Only 88,184 signatures are required to place the measure on the ballot.

“Everyone is pretty thrilled, and it is a real showing of support for our campaign,” Driessen said. “Our volunteers are fanning out around the state and really talking to voters everywhere and feeling the goal of the campaign resonates with Oregon citizens.”

The next step for the campaign is to build support for the measure, she said. Supporters hope to see the $5.2 billion in biennial revenue from the tax will help offset a projected $1.3 billion shortfall in the next biennium and augment spending on education, health care and senior services.

“It's way past time that our schools, our health care, and our senior services get the funding they need. While volunteering and talking with Oregonians, it became clear that decades of underfunding had taken a toll on residents young and old,” Khalil Edwards, a volunteer signature gatherer, said in a statement released Friday afternoon. “Parents are frustrated by overcrowded classrooms, and seniors are wary of what their retirement might look like. That's what fueled me as I was collecting signatures — a better Oregon that values kids, seniors and every Oregonian.”

A business coalition with more than 500 members is strongly opposing the measure, saying the tax will drive up prices for consumers and small and medium-sized businesses.

"Our group will campaign vigorously against this ill-advised proposal," said Rebecca Tweed, campaign coordinator for Defeat The Tax On Oregon Sales. "We are confident that when voters become aware of its damaging consequences they will strongly reject it in the fall."

The Legislative Revenue Office is scheduled to report on the projected impacts of the corporate tax during legislative hearings Monday, May 23.

The report will examine the effects on state revenue, wages, private and public sector employment, prices and other economic indicators.

Often referred to as a gross receipts tax, the 2.5 percent levy would apply to certain corporations with annual sales exceeding $25 million. The tax would affect about 1,000 of Oregon’s 30,000 corporations, said Legislative Revenue Officer Paul Warner.

"We expect that the report is going to confirm what we've been saying for awhile now: that large and out of state corporation will pay this tax," Driessen said. She said the campaign, however, is open to new information and to striking a compromise with business leaders provided that the proposal raised enough revenue "to fund our badly underfunded services and focused on making corporations do their part."

But business leaders said the trickle-down effect of the tax - in the form of higher prices - will hurt consumers, employees and businesses of every size.

"Everywhere you have a gross receipts tax of this nature the consensus among economists is who pays it is you and me and small business and families, and we think that picture will be painted very vividly on Monday - that Oregon families are going to be paying this $5.2 billion tax increase," said Ryan Deckert, president of the Oregon Business Association.

Sen. Mark Hass, D-Beaverton, who proposed a smaller tax on corporations during the February legislative session, said Monday's report could spur lawmakers to take another look at offering an alternative.

"I think after Monday it will start to get real," Hass said. "I think there is a chance for a compromise, and I think there is an opportunity for sensible people to get together to look at coming up with an alternative to what is going to be a very contentious, divisive campaign."

Sen. Richard Devlin, D-Tualatin, said in April that he is working on alternative to the tax measure but did not return repeated calls for details from the Pamplin Media Group/EO Media Group Capital Bureau.