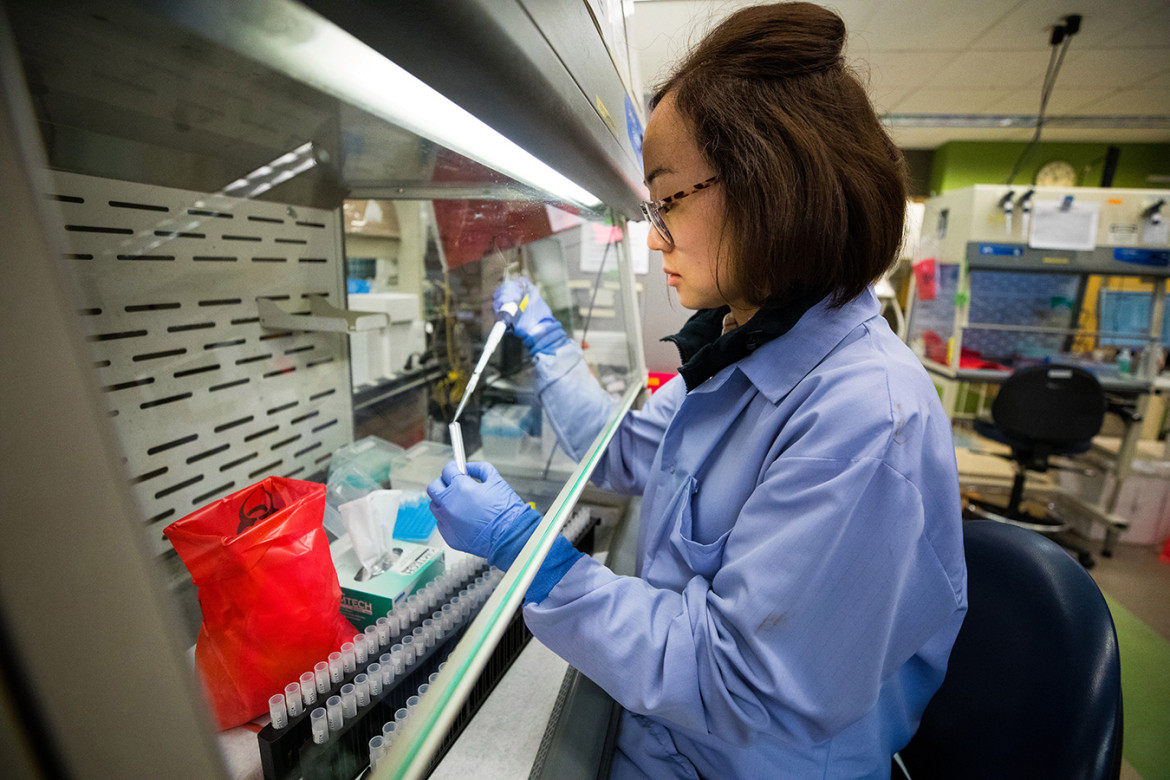 A new home-based COVID-19 testing initiative is putting Oregon State University and the city of Corvallis at the national forefront of the coronavirus pandemic response.

The university has launched an effort to test Corvallis residents for COVID-19 in their homes, aligning with one of Gov. Kate Brown’s requirements for more testing data to reopen the state.

Those workers are about to get much busier. They will visit an estimated 960 Corvallis households over each of the next four weekends, testing an estimated 4,000 city residents in total for COVID-19 without entering a single home. Residents are given a “sampling kit” that includes a nasal swab and plastic tube. Patients insert the swab inside the entryway to their nostril, rather than more invasive swabs that require collecting samples from the back of the nasal cavity. The patient then places the swab in the tube, which contains a liquid to inactivate the virus and preserve the sample for analysis. The kit also includes a plastic bag and disinfectant wipe to sanitize the bag.

The effort comes at a crucial time in the coronavirus pandemic in Oregon. The state appears to have flattened the curve, with hospitals saved from an overwhelming surge of patients. Yet public health and government officials say it’s too soon to open businesses and go back to life as it was before. They need to see a dramatic slowing of cases and they need more testing, to gauge where the state is in the epidemic.

Brown has outlined five benchmarks Oregon must clear before any significant reopening can occur: In addition to more testing capacity, the number of new daily cases in the state must fall, supply of personal protective equipment for health care workers must increase, the state must coordinate contact tracing and set up isolation facilities for sickened residents to safely quarantine.

But key to reaching those goals is a significant increase in testing capacity. Public health officials have said recently that testing volumes across the country need to double or triple before states can consider reopening on a large scale.

The Corvallis home-based testing effort has few national peers. Earlier this month a similar Seattle-area initiative launched to conduct coronavirus testing from residents’ homes, in what has been described as the first program of its kind in the country.

“What has been developed has occurred at a rapid pace,” OSU spokesman Steve Clark told The Lund Report.

The university and other research institutions were approached in March by federal officials about pooling resources to ramp up testing in local communities. Testing infrastructure was spread among university departments including OSU’s colleges of science, public health and human science, veterinary studies and agriculture science. Among them the university already had the equipment and knowledge to collect personal information and samples from households in a manner that meets state and federal testing requirements.

OSU coordinated its individual colleges into the TRACE team in a matter of weeks, with help from a $750,000 grant from the David and Lucile Packard Foundation, Clark said.

The effort figures to massively increase the proportion of Benton County residents who have been tested, and help fulfill Gov. Brown’s goal of establishing scientifically supported profiles of the virus’s spread in a region.

A total of 661 Benton county residents had been tested for COVID-19 as of Sunday, according to Oregon Health Authority figures. Twenty-seven residents have tested positive, and five have died of the virus.

Testing 4,000 more residents over the next four weeks would make Benton County the third most tested county in Oregon, behind Multnomah and Washington counties, and one of the most tested by far on a per-capita basis, state data show.

Current testing “has probably uncovered essentially all of the people who are really ill with this,” Benton County Interim Health Department Co-Director Charlie Fautin told The Lund Report. “But because of a lack of testing capacity, what we don’t know is how many people with mild or asymptomatic infection may be out there.”

The OSU effort comes as governors and the Trump Administration argue over whether states or federal agencies bear more responsibility for ramping up COVID-19 testing nationwide. Corvallis is typical of the dilemma that many local health officials find themselves in. Confirmed positive cases have been relatively low, Fautin said, but testing capacity is barely scratching the surface of likely cases.

“We know that our medical providers and our emergency room are getting calls and visits from people who do have a cough and do have sore throats and a fever. A lot of those folks are calling in and being told, ‘Hey, this sure sounds like what you have, but you really don’t require medical care at this time, so we don’t want you in our clinic,’” Fautin said. “We don’t know how many of those cases really aren’t being treated and documented. So this will be an important piece of information that we and the governor and the Oregon Health Authority can use to really make some informative, science-based decisions.”

The university is also in discussions about expanding the TRACE program around the state. OSU has been contacted by officials in Bend and other Oregon communities about setting up similar efforts, Clark said.

Meanwhile, the pilot weekend in Corvallis was warmly received.

“Not only were members of the community that were reached in their homes positive,” Clark said, “but we had people walking, jogging and driving shouting, ‘We know what you’re doing, thanks for doing this, go Beavs.”