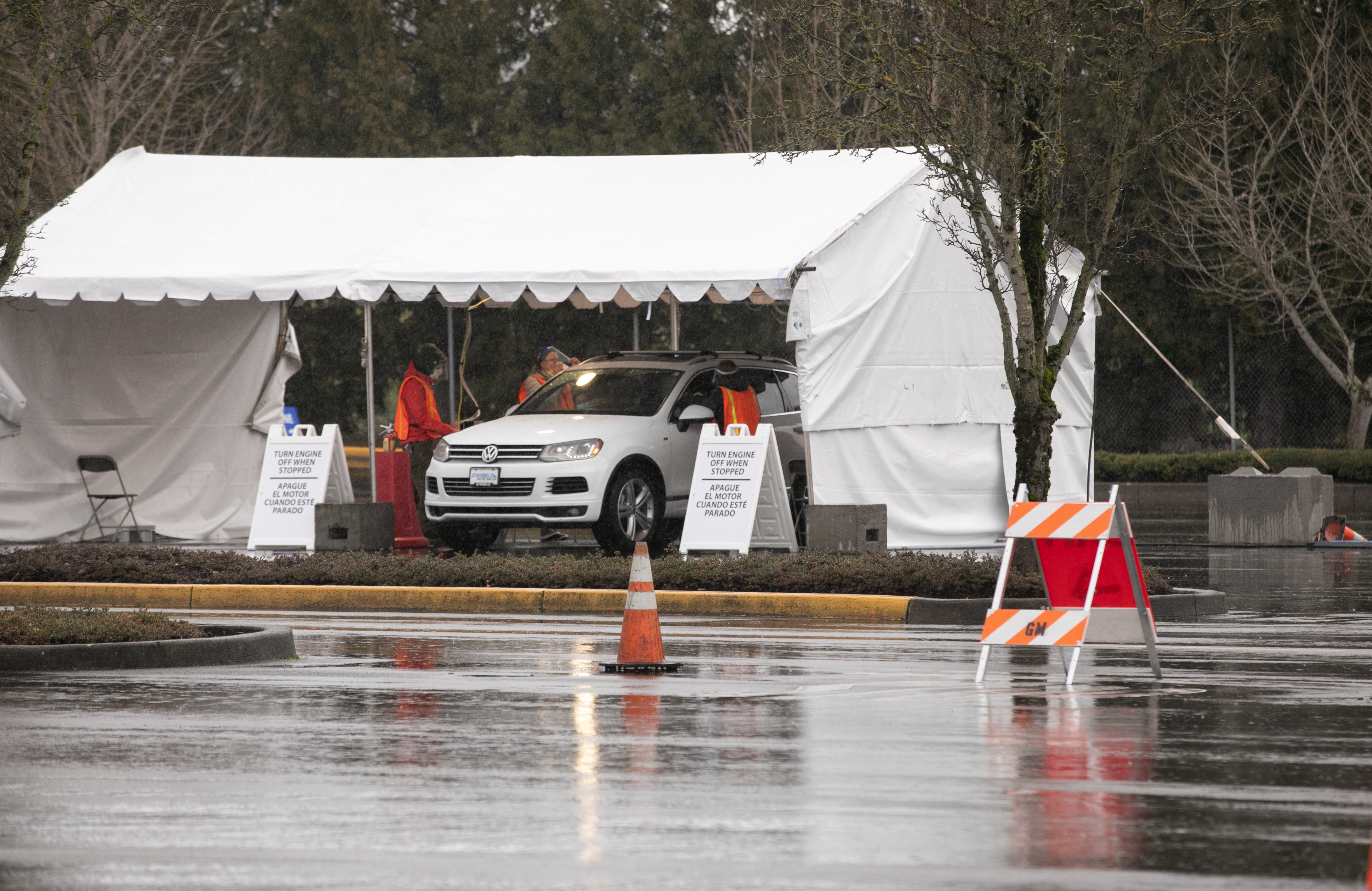 Oregon educators still face weeks of waiting for COVID-19 vaccine doses, even after Gov. Kate Brown pushed them ahead of senior citizens in January in an effort to reopen schools sooner.

So far, the state has allocated only about half the first doses necessary to inoculate a workforce of more than 150,000 K-12 educators, school support staff and early childhood instructors. Rural areas have fared better than the hard-hit Portland region in putting doses in arms, creating an uneven vaccine rollout among the state’s 197 school districts.

The situation is unlikely to change immediately as the state has a limited vaccine supply and an ever-widening pool of people becomes eligible for vaccinations. The work of inoculating teachers slowed down this week, as the state allocated just 11,500 first doses for educators, a reduction as Oregon started to provide doses to seniors age 80 and older. The prior week, the state had allocated nearly 29,000 first doses for educators.

Brown sparked an outcry last month with her decision to start vaccinating K-12 teachers nearly three weeks sooner than senior citizens 65 and older, saying it was necessary to open schools quickly to relieve stressed students and families. Her move sparked opposition from different quarters, from the state teachers union to senior advocates who questioned the wisdom of putting teachers ahead of senior citizens. Three-quarters of the 2,044 Oregonians who have died thus far in the pandemic have been 70 and older, state data show.

”They appreciate being prioritized, but at the same time, to be frank, there is a certain amount of heartburn about being prioritized,” Bob Estabrook, a government relations specialist with the Oregon School Employees Association, told lawmakers Wednesday at a meeting of the House Subcommittee for COVID-19. The labor union represents more than 22,000 school workers.

“We’re hopeful that as we move through phase 1a, individuals will be able to see more vaccines,” Gill said. “We’re hoping to see that number climb back up so we can continue to work through the educator population.”

In late December, the state started vaccinating the 1a priority group, focusing first on hospital workers and then expanding to other health care workers plus staff and residents at long-term care facilities. That work continues but has slowed in part because the task of vaccinating residents in small group facilities like adult foster homes is lengthy and the number of residents per facility is meager.

Overall, the state has administered slightly more than 604,000 doses to Oregonians, with some having received two shots, and others just their first shot. So far, Oregon has received 821,150 doses of vaccine at clinics, hospitals and public health districts. The Oregon Health Authority doesn’t directly put doses in arms, but determines where the federal government and pharmaceutical makers Pfizer-BioNTech and Moderna will send doses.

This week’s allocations of vaccine doses demonstrate the limited supplies and growing number of priority groups. The state has 20,000 first doses for seniors age 80 and over, a group that has about 130,000 unvaccinated people. Some 11,500 first doses will go to K-12 educators and early childhood workers. Another 13,000 first doses are set aside for other 1a priority categories that remain unvaccinated, including health care workers and staff and residents in long-term care facilities and group homes. The state has designated 5,000 first doses for adult prison inmates after a court order forced the state to include them in the 1a group. The state also has allocated 3,000 first doses to tribal populations who don’t get vaccinations through the Indian Health Service, a federal agency that cares for tribal members.

Demand far exceeds supply. The state has 4.2 million residents, including 770,000 people age 65 and over. The state is still trying to figure out how to prioritize non-health-care workers and other non-priority groups in the under-65 age category.

“What we’re trying to do moving forward is move to a more predictable allocation methodology,” Oregon Health Authority Director Patrick Allen told lawmakers. This will help in the planning of mass vaccination events at the Oregon Convention Center in Portland and elsewhere, he said.

The state will gradually make younger seniors eligible each week through February, until seniors age 65 and older are eligible the week of March 1. But after they become eligible, seniors will have to wait weeks for doses.

As supplies increase, the state will send 49,000 doses weekly to counties for seniors age 65 and older and 23,500 weekly doses to help mass vaccination sites throughout the state in Portland, Bend, Lane County and southern Oregon.

In an estimated three weeks, the state should begin receiving up to about 100,000 doses a week, nearly double what it was receiving three weeks ago, Allen said.

Pharmacies participating in the federal retail pharmacy program are still waiting for the vaccine, Allen said.
“They have not received their vaccine and it’s not completely clear to them when exactly they will,” he said.

The vaccine rollout is slower in the Portland metro area school districts than in rural school districts, a reflection of the logistical challenges that more densely populated regions face and the ongoing need to vaccinate the remaining 1a population in the tri-county region.

An estimated 48% of all pre-K through 12th-grade educators in the tri-county region have received their first dose, Don Grotting, superintendent of the Beaverton School District, told lawmakers.

He said more pre-K through 5th grade teachers have been vaccinated compared to teachers of higher grades. Middle school educators will receive a first dose by Feb. 23, he said. Many high school teachers and substitutes won’t get a first dose until March.

Grotting said his district plans to survey staff to find out how many have been vaccinated. But, because of medical privacy rules, the district cannot tell parents if a specific teacher got vaccinated, he said.

“As you can imagine, parents are wanting to know if my child’s teacher has been vaccinated,” he said.

Mark Mulvihill, superintendent of Intermountain Education Service District, works out of Pendleton with 18 school districts across a four-county region in northwest Oregon. Education service districts are agencies that work for multiple school districts in a region to save money on inter-district programs.

“As of last week, all educators had an opportunity in our counties to be vaccinated,” he said, adding that initially about half of them chose to get vaccinated.

The work has spurred school districts to increase limited in-person instruction and open up K-5th grade classes in particular, he said.

In the short term, the snowy weather will bog down work.

The winter weather forecast has disrupted vaccination schedules in the Portland area this weekend. Oregon Health & Science University is canceling three of its clinics -- at the Multnomah Pavilion on its Marquam Hill campus and the two drive-through clinics at the PDX red economy parking lot and at the Hillsboro Stadium -- on Saturday and Sunday. OHSU said it will contact all affected patients, including many people aged 80 and up, to reschedule them.

For now, the four hospitals systems running the Oregon Convention Center site plan to forge ahead this weekend though they said in a news release that the center could open late or close early. Nearly 9,000 appointments are scheduled at the center over the next three days.

"A total closure would only happen in the worse case," the release said.

The hospitals said they will send out a FlashAlert to announce any time changes and post updated information on their website -- All4Oregon.org. They also plan to set up a phone line with a recorded message in English and Spanish on Thursday with details about time changes. Kaiser Permanente, OHSU, Legacy Health and Providence Health & Services said they would alert the public on their social media accounts as well.

They urged everyone who can safely make it to the convention center to do so. Those who cannot should not cancel their appointment. They're working on a way to contact people who cannot show up and get them rescheduled so that they don't have to go through the signup process again.

The convention center opened up 4,500 more appointments on Thursday morning for next week but they were quickly being reserved. To secure one, sign up at covidvaccine.oregon.gov

Managers at the convention center will be clearing sidewalks and other walkways of snow and ice, and the building's doors near the TriMet station for MAX and the Streetcar will be open to make access easier.

Feb 10 2021
News source:
The Lund Report
Keywords:
teachers, COVID-19, Patrick Allen, Gov Kate Brown
×
This article is for premium subscribers. If you are one, please sign in below.
You can see two more premium stories for free. To subscribe, click here. We depend on premium subscriptions to survive, and they are tax deductible.
Sign InGo Premium Not now