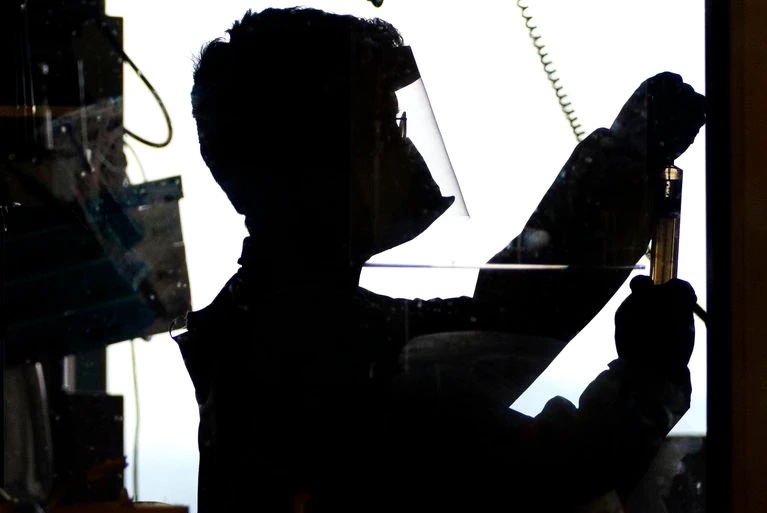 Hospitals in Oregon are still understaffed and struggling.

And now they’re facing a new challenge: planning for omicron, the new variant of COVID-19 that’s upending what we know about the pandemic.

The first three cases of omicron were detected in Oregon just on Monday.

Now, local scientists are warning that omicron could become the dominant variant in the state within a month or so, poised to trigger a new fifth wave of infections.

“Oregon probably has a little time, but each day is counting now,” said Peter Graven, a data scientist at Oregon Health and Science University and author of an influential COVID-19 statewide forecast. “The cases are here and it means that certainly in January we’re going to be dealing with this big time.”

Graven says while just three cases have been detected so far, likely many more have gone undetected. He points to places like the United Kingdom and Denmark, where the variant was first identified about three weeks ago — and is now driving up infection rates.

Whether that fifth wave is a lion or a lamb will likely hinge on two key factors: if Oregon can quickly increase the number of people who are vaccinated and have received a booster dose, and omicron’s virulence.

So far, early evidence shows a two-dose course of approved vaccines is significantly less effective at preventing mild infection and transmission of omicron than it was against past variants.

While the data is limited, scientists say there are reasons to believe two doses may offer some protection against severe outcomes like hospitalization and death.

However, booster doses appear much more effective against omicron than just an initial course of vaccine.

“If you’re really interested in doing the things that you can do to protect yourself, boosting is something that is really likely to enhance your protective immunity,” said Dr. Bill Messer, a clinical researcher at OHSU who treats COVID-19 patients and studies viral evolution.

Only about 20 percent of Oregonians have gotten a booster shot so far.

Graven says the bottom line is that Oregon needs to drive up its booster rate — otherwise many more people will be susceptible to getting infected as the new variant spreads.

“We were getting very close to herd immunity once again with delta. Now, to have a lot of that immunity be kind of thrown out the window is a real problem,” he said.:

Graven says getting booster doses to people in nursing homes and other types of long term care should happen immediately, before the variant has time to start spreading.

“They are still our most vulnerable group. They are the most likely to get sick and then need to go to the hospital. And many of their vaccines were delivered first, which means they have had the most time to wane. This is a population that needs to have their booster,” Graven said.

Less virulent — but how much less?

Graven and Messer both say research is pointing toward omicron causing less severe illness than other variants — a second key factor in what the next wave of cases may look like.

Messer cautions that much of the data on severity comes from South Africa, a country with a very young population, among whom COVID-19 tends to produce milder illness in general.

But he believes the research on virulence so far is good news.

“I am becoming cautiously optimistic that omicron is less virulent than delta or prior variants,” Messer said.

“The real question is how much less virulent.”

If omicron is a little less virulent, but capable of infecting lots of vaccinated people — that could still be enough to bring Oregon’s health system, still reeling from the delta wave, to its knees again.

“Even with a low rate of hospitalization, when we open up so many people to being no longer protected, it’s gonna put a real strain on our healthcare resources. It’s bad news.” Graven said.

Messer says its possible that omicron is inherently less virulent because of its mutations.

But another critical question is whether the variant is causing less severe infections because it is re-infecting a lot of people who have been infected previously and causing breakthrough cases in vaccinated people.

Experience with a previous version of the virus may be giving people’s immune systems a head start against the variant, regardless of its new mutations.

“There’s probably still protection against severity of illness for people who have been vaccinated,” Messer said.

He expects two types of immune cells, memory T cells and memory B cells, may still recognize omicron and begin to fight it.

Memory B cells, which produce antibodies, may play a particularly important role in moderating the severity of an infection with a new variant.

Messer says the best way to give your immune system a head start against omicron is to get boosted — or if you haven’t been vaccinated at all, to start the process.

“It’s helpful that it’s less virulent, but it still doesn’t do the work that vaccination would do to take the pressure off our health care system.”