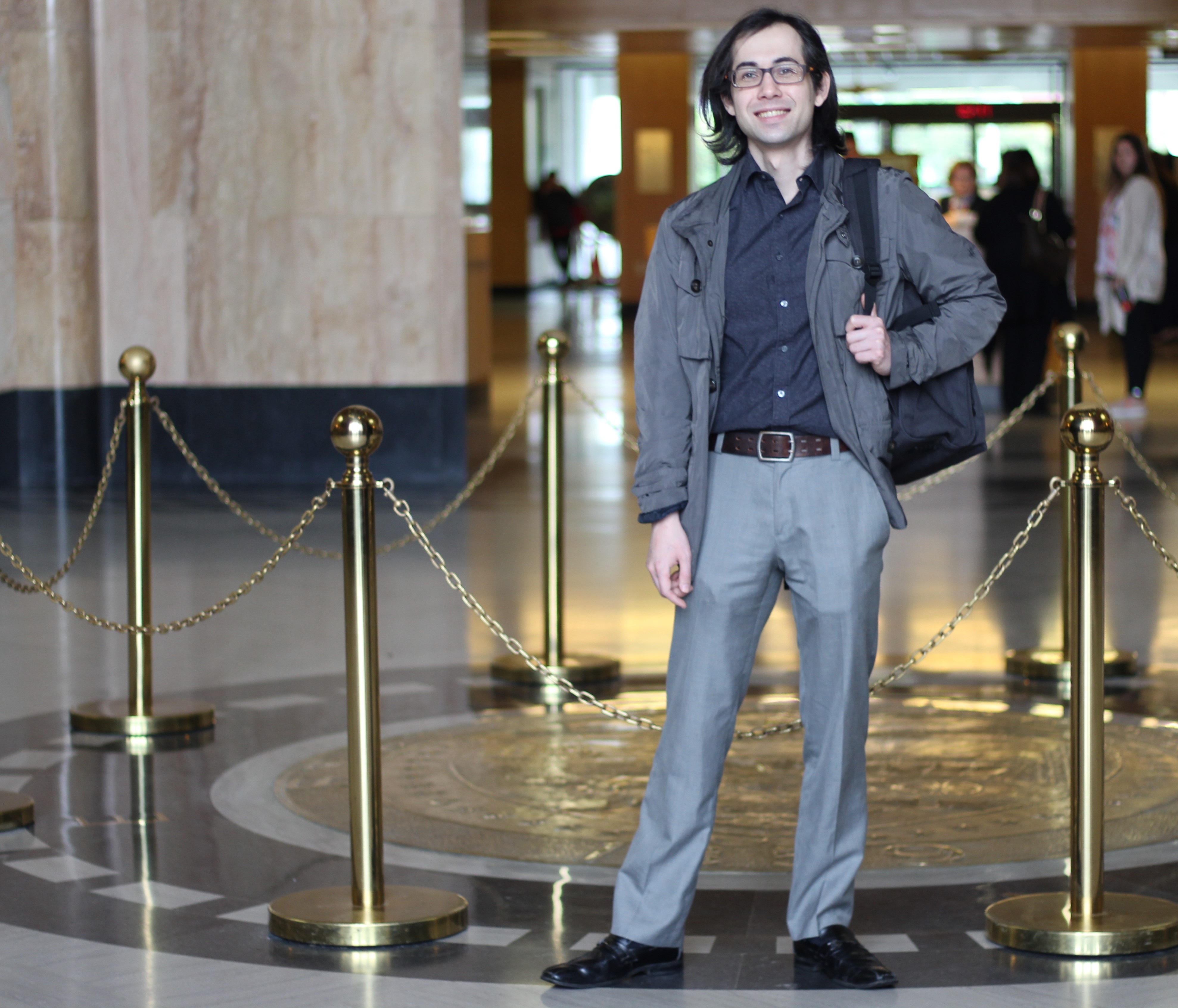 Mark Griffith is a familiar face in the Capitol in Salem. He often testifies before the Senate and House health care committees.

He also leads a statewide group focused on the high price of prescription drugs.

As a program manager at OSPIRG, the Oregon State Public Interest Research Group, and president of the nonprofit, Oregon Coalition for Affordable Prescriptions, Griffith is focused on the cost of health care. One of his biggest concerns is the skyrocketing prices of prescription drugs.

Lawmakers this session are considering a number of drugs targeting high prescription prices. Though some seem out of reach, Griffith is hopeful that legislation might pass this session that would give relief to consumers.

But the stakes are high, and opposition to change can be fierce.

The prescription drug system involves a complex network from the researchers who develop drugs to the manufacturers that make them to middlemen who negotiate prices and the insurers that decide which drugs will get preferential treatment on their prescription lists. A lot that goes on behind the scenes. Much of it is opaque. But what consumers do know is that drug prices are high and sometimes unaffordable.

The Lund Report sat down with Griffith, who’s optimistic about the prospects of health care legislation this session that’s focused on curtailing high drug prices and expanding health care coverage. The interview has been edited for clarity and conciseness.

What are OSPIRG’s priorities for the 2019 legislative session?

Griffith: Our real focus overall is all about the value of health care. We’re really looking to push policies that approach that from both directions, both in terms of reducing prices without reducing the quality of care, and also ways to improve the quality of care without raising prices excessively. So the big focus this year so far has been very much on prescription drug prices, which are a really hot issue. We’ve got a number of bills that we’ve been pushing related to that, some of which are moving forward. It’s really something that I think people want concrete action on.

One idea is to import drugs from Canada. How feasible do you think that is?

Griffith: I think it’s very feasible. I think that it’s very much a temporary solution, not a permanent fix. But it’s ultimately something that we can do that will actually benefit Oregon consumers in a relatively short period of time. Like we could see this program up and running in two or three years, easily. We have a situation where the (difference in) prices are as much as 30 percent, 50 percent, even more than that for the exact same drug between Canada (and) the United States. If you can open up that supply in a real, meaningful way, that’s something that could have an impact for a lot of consumers as well as bringing down the total spending on prescription drugs by the state, which has been a major driver for rising costs over the last few years and for rising health insurance premiums as well.

What do you think is a more permanent solution?

Griffith: Ultimately, we should have a system where the price for prescription drugs is reflective of the value of the treatment. But you have a situation where prices are increasing on a lot of medications (even though) there hasn’t been a change to the product. You see this with insulin, for example. A new formulation comes out and (manufacturers use) this to charge a price that may be double that of the existing product (while) the therapeutic value is basically identical. We don’t think that’s a justified price increase. That’s not reflecting an increase in the value of the treatment; that’s reflecting a pharmaceutical company making changes to preserve their patent protection for longer. We want to get away from a system where that’s possible.

Have you seen any legislation federally or in other states that addresses that?

Griffith: There’s some very ambitious discussion at the federal level right now. A lot of that is centered around restoring the power of Medicare to negotiate drug prices. Medicare used to be able to negotiate drug prices. That (authority) was stripped from the agency. So now they just have to accept whatever price pharma sets for them. Being able to bring that market leverage back into play, that would be something that could potentially have a big effect.

There are other policies that are related to the idea of patent abuse (when) a pharmaceutical company (effectively manipulates) patent laws to get greater extensions to their monopoly protection that they would normally be allowed to have, whether that’s changing formulations or taking advantage of obscure provisions. There (have) been bills proposed that would, for example, open up licensing for generic manufacturing of those drugs earlier than that would normally be required. That’s one sort of concept that’s been discussed at the federal level.

The difficulty with prescription drugs is that there are a lot of restrictions with what we can do as a state, but there are some things we can do that we believe will have a real impact for consumers, so that’s what we’ve been focusing on. If it got to the point where it looks like some of these big ideas are moving forward, maybe we’d weigh in on that, but we’re not there yet.

There are some other smaller bills, like one that would make drug manufacturers notify consumers 60 days in advance of a price increase. What kind of impact do you think smaller measures like that can have?

Griffith: I think they could have a real benefit, actually. The 60-day notice of price increases, it’s something that was in the (drug transparency) bill we passed last year, and it was something that got stripped out by objections from various industry groups. This really does two things. If it’s structured in a way that patients have access to that information, that can give patients time to plan ahead for these price increases and not be in a situation where they’ve got additional financial impact that they didn’t have time to plan for.

But where the real impact is is having this notice going out to payers, which have formularies, a sort of drug preference list that allows them to prioritize one brand versus another (to treat) the same condition. If (insurers) know that a price increase is coming in 60 days, that gives (them) the option to change (the) formulary ahead of time.

Sixty-day notice has already been implemented in California. We actually saw a number of pharmaceutical companies roll back those price increases over the summer as a result of that exposure.

We think that having the information available to (insurers) and potentially consumers in Oregon will have that same sort of effect.

A lot of fingers get pointed at insurers and pharmacy benefit managers for high prices. Why do you think there aren’t more bills addressing those parts of the drug supply chain?

Griffith: We’ve made a very conscious decision to keep the focus on the list price that is set by pharmaceutical manufacturers. The reason for that is (that) the pharmaceutical supply chain is incredibly complex. There are a lot of different players, and the interrelationships between them are very, very convoluted. But if you really look at where the profits are going, it’s the pharmaceutical manufacturers that are making more profits on the sale of any given drug than every other player in the supply chain combined. And that includes the (pharmacy benefit manager), the insurance carrier, wholesaler, distributor and the actual retail pharmacy. So that’s the place where there’s the most give, really.

If you can address the problem of astronomically high list prices, that can put you in a situation where this is going to flow downstream and it’s going to resolve a lot of these other problems as well. There is a bill that came out of the task force for fair pricing on prescription drugs. The mandate for that task force was specifically to look at the potential benefits of additional transparency for the rest of the supply chain. So they’ve got a bill that has come out of that which does attempt to address a lot of these other things.

There are a number of bills on moving the state toward universal health care. Do you think any of these are very feasible?

Griffith: (OSPIRG hasn’t) taken an explicit position on the idea of universal care. But we do support the concept of a public option and the general idea that we have public systems that are doing a good job of providing high-value care to certain populations, which do receive assistance right now. And giving everybody the opportunity to buy into a system like that could be something that could provide a lot of benefit, not just to individual consumers but also to the state as a whole. So there’s a lot of interest in these concepts. Some of them are very, very ambitious, some of them are very, very cautious. And I tend to think that some of these more cautious approaches are a way that can move us towards a more universal system over time, without trying to dismantle what we have right now and replace it wholesale in a very, very short period, which is probably, for a variety of reasons, is not going to be something that’s very feasible.

Griffith is supporting buy-in plans, like medicare buy-in or medicaid buy-in.This ignores what is driving prices in the medical industry. As long as our system continues to break up the risk pool of users the costs will continue to rise.  A public or social insurance would cover everybody.  Therefore the healthier people make up for the unhealthy over time.  Realize that most people only need preventive care like vacinations, physical check ups, eye and dental exams. The income received from everyone covers the costs of the fewer in need of chronic health issues.  Griffith's and others approach allows the risk pool to continue to be broken into smaller and preferrable risk pools. Therefore there is little savings.  By going directly to a public singlepayer system you accomplish a number of advantages as follows: One Risk Pool, Lower Administrative Costs, Bargaining power on prices of Pharmaceuticals, Medical Equipment and medical providers. This controls pricing and therefore will lower the rate of medical costs.  It induces medical providers to spend more time preventing disease and treating chronic issues at an earlier more manageable stage. Is there anyway to get this view point or analysis into the discussion?