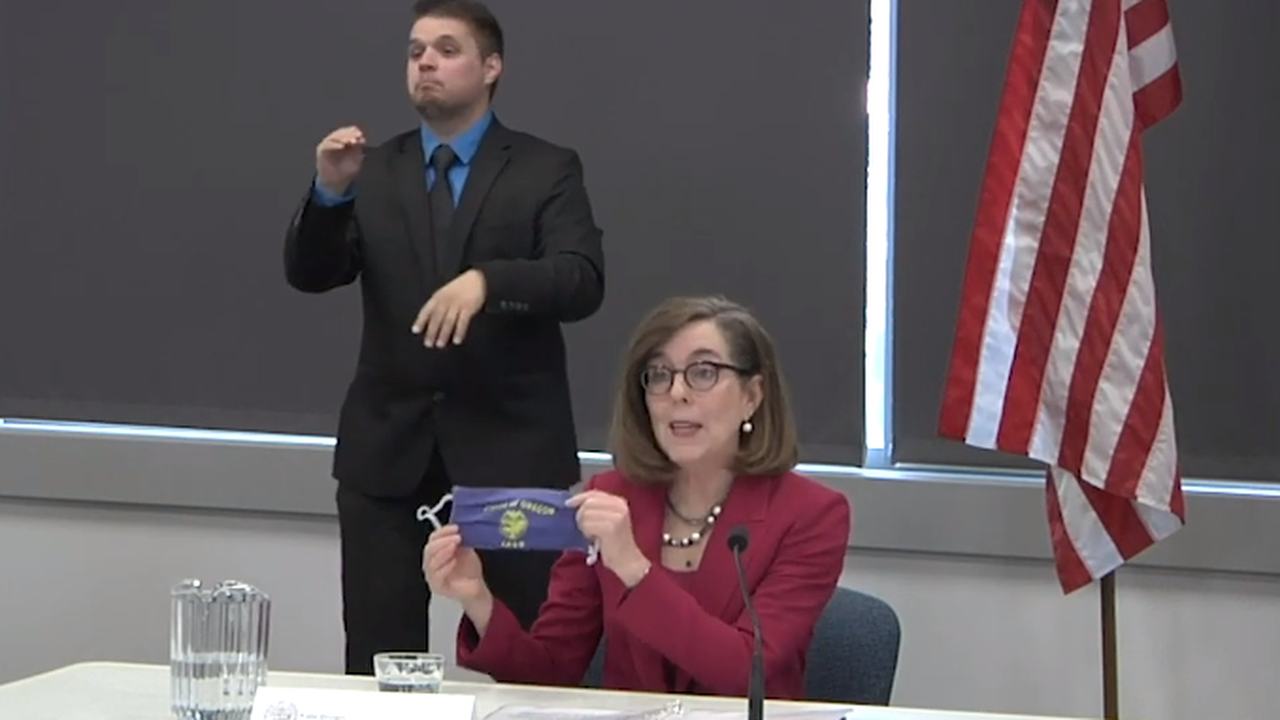 Gov. Kate Brown faced forceful pleas on Monday to reverse her decision to put  educators ahead of seniors for a COVID-19 vaccine, with scientists and even her own commission for senior services making appeals.

The Governor’s Commission for Senior Services implored Brown to rethink her decision to wait to vaccinate most senior citizens until February.  Brown has faced heavy criticism for the move, especially since about 90% of Oregonians who died in the pandemic are 60 and older.

The commission’s letter highlights the high death rate and underscores the deep division over Brown’s plan, which puts about 150,000 teachers, school support staff and early childhood instructors ahead of senior citizens.

“This is an unprecedented death rate for one group of Oregonians, and the death rate is highest amongst African American and Latino older Oregonians, people who have suffered from systemic racism and cumulative disadvantage throughout their life course and who now are experiencing it again due to your decision to make them wait for a vaccine,” the commission’s letter states. It was dated Monday and signed by the commission’s chair, Mary Rita Hurley,  on the group’s state government letterhead.

Brown previously has defended her move, insisting it was in the social interest to reopen schools this academic year. In a statement to The Lund Report, Brown spokesman Charles Boyle said vaccine supplies are limited and seniors who live independently can protect themselves by self-isolating. He said opening schools would benefit students and working-class parents struggling to balance work, school and child care during the pandemic.

“These are tough decisions, and we thank all Oregonians for their sacrifices and their patience in exercising safety precautions such as mask wearing and physical distancing for a few more weeks before these vaccinations can begin,” Boyle said. “This is very hard. The revisions to Oregon’s schedule for vaccinating educators and seniors does not reflect valuing one group of Oregonians over the other -- it is simply a case of having far less vaccine supplies than the federal government instructed us to prepare for originally.”

Oregon’s vaccination rollout began in December with the 1a group, which includes health care workers and residents and staff in long-term care facilities and group homes for people with disabilities. Senior citizens who have a caregiver also are eligible if they live at home. Senior citizens who live independently but don’t have a caregiver will have to wait at least until the week of Feb. 8, when people age 80 and older will become eligible.

The state will roll out vaccinations to senior citizens by age in subsequent weeks. By the week of Feb. 28, all seniors age 65 and older will be eligible for a vaccination under the state’s current plan.

In its letter, the commission reminded Brown that most  other states have crafted different sequencing plans based on the recommendations by the federal Centers for Disease Control and Prevention. The CDC recommends vaccinating  older people, those with pre-existing health conditions and people at a high risk of exposure ahead of others.

“Your decision directly contradicts those guidelines,” the letter states. “There are 45 other states that are listening to the science and vaccinating vulnerable seniors.”

The Governor’s Commission on Senior Services is charged with studying programs and budgets that impact elderly people, making recommendations on policies and advocacy work. The commissioners come from a variety of backgrounds, including advocates, law enforcement and business. The governor can appoint up to 21 members, and the Legislature appoints one lawmaker from each chamber.

“Since it flies in the face of science, we just don’t understand,” Hurley said in an interview.

Other advocates have also urged  Brown to reverse her decision, including the Oregon Gerontological Association, which represents professionals who work with aging people.

“A disproportionate number of older Oregonians have already died in this pandemic,” Dr. Siobhan Maty, board president of the Oregon Gerontological Association, wrote in a letter sent on Sunday to Brown. “We implore you to reverse your decision to delay the distribution of life-saving vaccines to this population.”

Stepping up vaccinations is more urgent than ever. The Oregon Health Authority announced over the weekend that a third person in Oregon had contracted the highly infectious variant of the coronavirus that was first identified in Britain. British authorities said preliminary data indicate that the variant -- B.1.1.7 -- could be more deadly as well. At the same time, scientists in Israel which has a vigorous vaccination campaign reported a 60% drop in hospitalizations among those who’d been vaccinated with the Pfizer-BioNTech shot three weeks earlier.

The U.S. is not awash in vaccine supplies, however.

Brown has said it would be quicker to vaccinate educators first since they’re a smaller group. Oregon has about 750,000 people aged 65 and over.

The state pared back plans to vaccinate senior citizens alongside educators after the federal government promised vaccine supplies, only to later say they didn’t exist.

Hurley said the commission would have taken their case to Brown’s office if capitol offices were open.

“If this was pre-COVID, we would have been down in the capitol talking to anybody that would see us,” Hurley said.

Even without in-person lobbying, lawmakers are well aware of the problem.

Oregon Health Authority Director Patrick Allen defended the plan on Monday during a presentation on COVID-19 to the Senate Health Care Committee.

“I’m getting emails probably like other legislators are from seniors who were originally told they were eligible,” Sen. Tim Knopp, R-Bend, told Allen. “They obviously are very, very unhappy about it. What would you like us to tell those people who are writing us?”

Allen said the state is “trying to accomplish a lot of different health objectives” and “trying hard to balance all of the risks and outcomes.”

But ultimately, he said the limited vaccine supply remains the biggest hurdle.

“The biggest challenge we’re going to continue to have is there’s just not enough vaccine,” Allen said.

The state has administered more than 492,000 doses of vaccine. Those numbers quickly change, however, because of the lag in data reporting.

The state doesn’t inject  doses, but it does make the allocations to hospitals, pharmacies and long-term care facilities for administration.

Allen said the state’s progress depends on vaccination supplies from the federal government. Currently, Oregon is getting about 50,000 doses a week. That could improve, he said, but officials are being cautious about making promises.

Allen said the state has “been led to believe” that it may see an increase of 20% to 30% in doses. Other vaccines in development -- including a promising candidate from Johnson & Johnson -- could make supplies more available too, Allen said.

Jan 25 2021
News source:
The Lund Report
Keywords:
COVID-19, Kate Brown, seniors, vaccine, health care
×
This article is for premium subscribers. If you are one, please sign in below.
You can see two more premium stories for free. To subscribe, click here. We depend on premium subscriptions to survive, and they are tax deductible.
Sign InGo Premium Not now