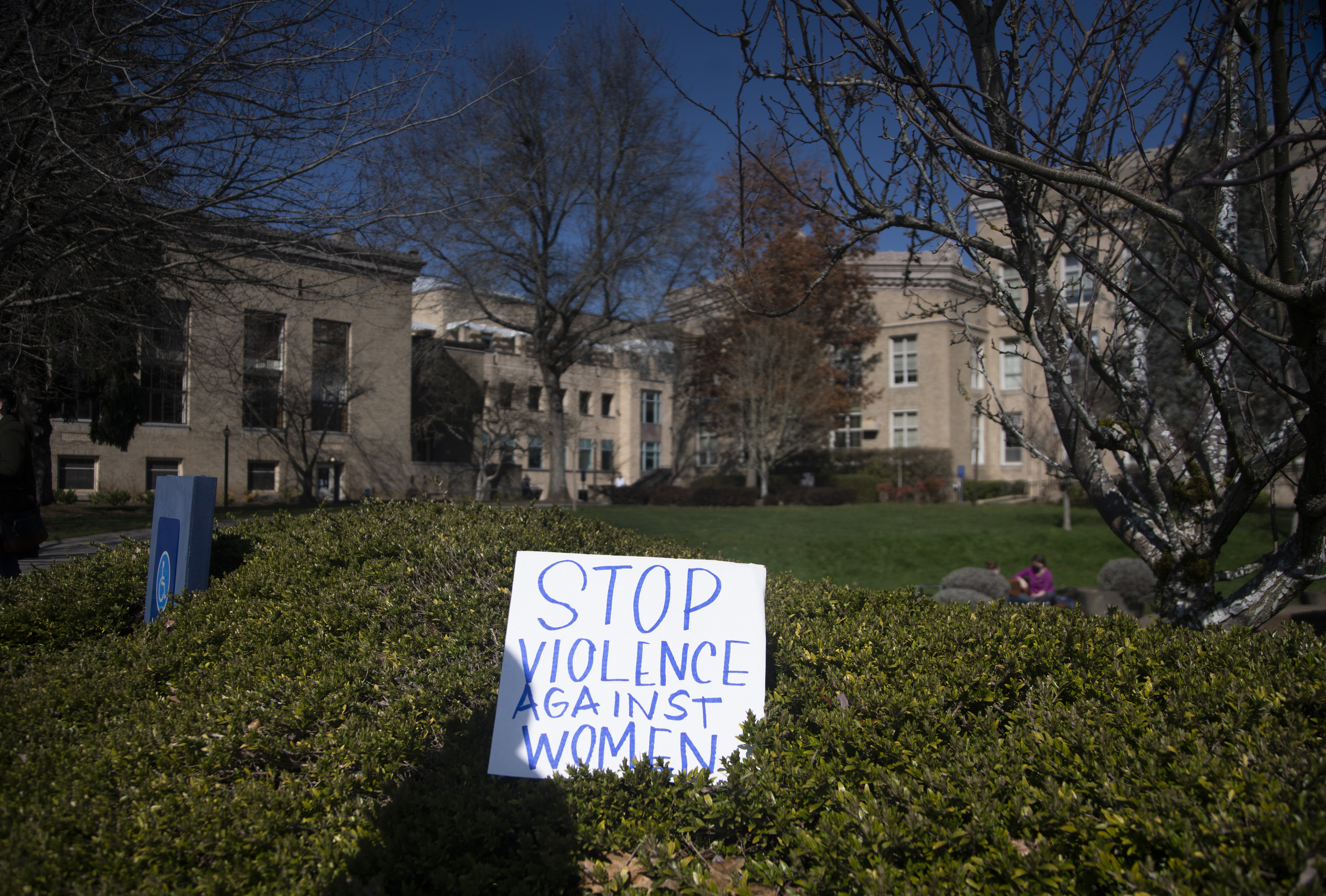 OHSU employees have held a few rallies to support the victim who filed a sexual assault lawsuit against the university and a former resident./Beth Nakamura/The Oregonian/OregonLive

Alumni, faculty and legal observers are expressing outrage over Oregon Health & Science University’s selection of former U.S. Attorney General Eric Holder at the astonishing rate of more than $2,000 an hour to examine the medical school’s handling of sexual misconduct and discrimination complaints.

They’ve raised questions as to whether OHSU adhered to public contracting laws, whether the university used a competitive selection process with a request for proposals and if not, why not. The agreement apparently doesn’t include a cap on the overall amount, a common standard for public contract offers.

OHSU says none of those contracting laws apply to them.

The university is a quasi-public agency, similar to the State Accident Insurance Fund, a not-for-profit corporation set up for workers compensation. It has its own budget and board of directors separate from the Oregon University System and isn’t represented by the Oregon Department of Justice. OHSU was granted the status in 1995 and spun off as a public corporation after making the case that it needed the financial flexibility to borrow money on its own and compete for talent.

Its governing statute doesn’t require a competitive bidding process for this project and its legal engagements are exempt from the university’s regular contract procurement guidelines, an OSHU spokeswoman said.

State law says, “The university shall be a governmental entity but shall not be considered a unit of local or municipal government or a state agency for purposes of state statutes or constitutional provisions.”

Disturbed by the university’s broad discretion and expensive outside legal contract, some lawmakers are pushing for an immediate amendment to a bill before the Legislature that now calls for a limit on the amount paid to outside lawyers hired by state government. State Rep. Marty Wilde, D-Eugene, who introduced the bill, said he favors an amendment to extend the measure to Oregon universities. The bill, which passed out of a House committee, is now before the Senate Judiciary Committee.

“Obviously Eric Holder is a distinguished person” who is sought after as an investigator, Wilde said. “But I just don’t think those rates are appropriate for a public entity,” he told The Oregonian/OregonLive. He called OHSU’s legal maneuver “one of the casualties of the dissolution of the Oregon University System” and added that he doesn’t believe the university should have outside counsel. “OHSU is its own island,” Wilde said.

Holder was tapped to conduct an investigation into OHSU’s handling of sexual misconduct and discrimination complaints in the wake of the high-profile sexual assault and harassment lawsuit against former anesthesiology resident Dr. Jason Campbell, who became widely known as the “TikTok Doc” for his viral dance videos in hospital scrubs. The social worker who filed the suit said one assistant professor of medicine divulged to her when she shared her account that he had received a “strikingly similar” allegation about Campbell more than a year earlier. Two more women claimed Campbell came up from behind them and forced his body against theirs at work, similar to the conduct the social worker alleged in the suit. A third woman said Campbell followed her around during his rotation in her unit in 2019, asking her for free hugs.

OHSU officials said last week they don’t know the total cost of the contract with Holder and former federal prosecutor Nancy Kestenbaum, but the university President Dr. Danny Jacobs called it a “significant investment.” Jacobs estimated the investigation would take at least six months by Holder, Kestenbaum and other lawyers at the Washington, D.C.-based Covington & Burling firm.

“Engaging Covington and undergoing this process is a significant investment, but we believe that the investigators’ extensive experience and expertise will result in a comprehensive and independent analysis that would otherwise be impossible,” Jacobs and OHSU board chair Wayne Monfries wrote to the school community on April 8.

OHSU’s general counsel made initial contact with potential firms and then the human resources committee of the OHSU board selected Holder’s firm, according to university spokeswoman Tracy Brawley. OHSU interviewed several law firms and its search focused on: the experience of the proposed investigative team; the team’s reputation for providing thorough inquiries; experience working with independent board members; the desire to engage a firm that wasn’t otherwise representing OHSU “in order to protect independence”; and an ability to launch an investigation within a short period of time, Brawley said.

“OHSU interviewed several reputable firms with deep experience in assessing institutional discrimination, harassment, retaliation and racism. Covington & Burling LLP was selected because of its extensive experience with these matters at complex organizations,” she said by email.

Covington & Burling’s website says the firm has handled “sensitive investigations,” at a time when businesses are under “exacting scrutiny with regards to the handling of alleged misconduct, including sexual harassment.” “This experience puts us in a position to respond quickly, effectively, and conscientiously to these issues when they arise and to strike the right balance between transparency and brand protection for our clients,” according to the firm ‘s website.

Under House Bill 2214, the cost of any private counsel employed by a state agency cannot exceed the greater of 200% of the standard hourly rate charged by the attorney general for the same services or a rate established by the attorney general for the specific purpose. If the amount sought is higher, a public statement would be required as to why. An “agency of state government” under the bill as written is defined as any agency in the state’s executive or legislative departments. The current rate for an Oregon assistant attorney general’s legal services is $214 an hour.

“Our health dollars being spent trying to cover up rampant workplace harassment is gross,” Parrish wrote on Twitter. “One hour of Eric = 10 to 15 ppl visiting a doctor...One hour of Eric = 32 hotel nights for homeless,” she wrote. “Shame on @OHSUNews. Our ‘health care dollars’ not hard at work.”

State Sen. Floyd Prozanski, D-Eugene, who chairs the Senate Judiciary Committee, said the House bill was recently referred to his committee. He’d be open to considering any amendments to the bill, said Kevin Moore, his legislative aide.

Lawyers and lay people reacted with disgust when they learned of Holder’s hourly rate and that OHSU went with him regardless. Kim McGair, a Portland lawyer, wrote on Twitter: “There are plenty of more than qualified lawyers in Oregon that charge a fraction of that. This is a gross waste of public money.”

Other litigators were struck by the $500-an-hour rate charged for Holder’s legal assistants. “Just bonkers,” Luke Bradley, a lawyer in Savannah, Georgia, wrote on Twitter. Lake Oswego resident Melissa Peterman asked on Twitter: “Why is there no outrage about this? OHSU is a public institution. We taxpayers are paying these excessive fees? Who approved this? Do they truly believe that there is no one other than Holder who can do this investigation?”

Oregon attorney Roy Thompson said high quality law firms in the state would do a great job for a lot less. “Do you really think it takes an attorney general to figure it out?” he asked, in a call to The Oregonian/OregonLive. He identified some of Oregon’s larger firms such as Tonkin Torp, Schwabe, Williamson & Wyatt, Lane Powell or Stoel Rives. “What’s wrong with them?’' he asked.

Chad Jacobs, a partner at the Portland-based firm Beery Elsner Hammond that represents local governments across the state, said Oregon’s public contracting laws lay out procedures for various contracts. He isn’t related to OHSU’s president Dr. Danny Jacobs. For example, OHSU’s procurement guidelines require that any non-federal fund purchases of more than $250,000 undergo a formal solicitation or bidding process, with the requested purchases advertised on its website and in other publications. Yet there’s also an exception to Oregon public contracting guidelines for professional services agreements sought by state public agencies. Legal services usually fall under this clause.

“Generally the jurisdiction itself gets to determine its own process,” Jacobs said. While unfamiliar with all of OHSU’s provisions, he said the university has a lot of discretion, usually based on “really broad language,” such as pursuing professional services “based on what’s needed” or “in the interest of the entity.”

Holder’s professional services contract, though, will have to go through an internal OHSU budget process, but entities such as OHSU likely have set aside money appropriated for broad legal services, he said. He said he had never heard of such a high hourly legal rate as Holder’s. But by hiring someone with such prominence, “I think what ‘s going on is this is an important issue for the organization,” Jacobs said. “They want to make sure whatever report comes out is beyond reproach.”

Because Holder and Kestenbaum aren’t licensed to practice law in Oregon, questions also have arisen over whether the agreement identifies an Oregon-licensed lawyer who will participate in the project. State law requires public agencies to hire only outside counsel who are members of the Oregon State Bar, but OHSU is exempt from that.

Holder and Kestenbaum “regularly lead investigations across the United States” and when needed, partner with locally licensed lawyers, said Brawley, the OHSU spokeswoman. Asked if any Oregon lawyers have been identified for the investigation, Brawley said, “If a locally licensed lawyer becomes necessary, the Covington team would engage counsel at their own discretion, independent of OHSU.”

AG Holder's firm will uncover in six months what anybody with a pulse could figure out for free in ten minutes.  It is more than ironic, indeed sad, that the outrage is about the expense, not on the horrific allegations that the Holder team will investigate.  Even worse is that the state leadership, the OHSU Board of Directors, and OHSU administration have ignored these insidious accusations for years.