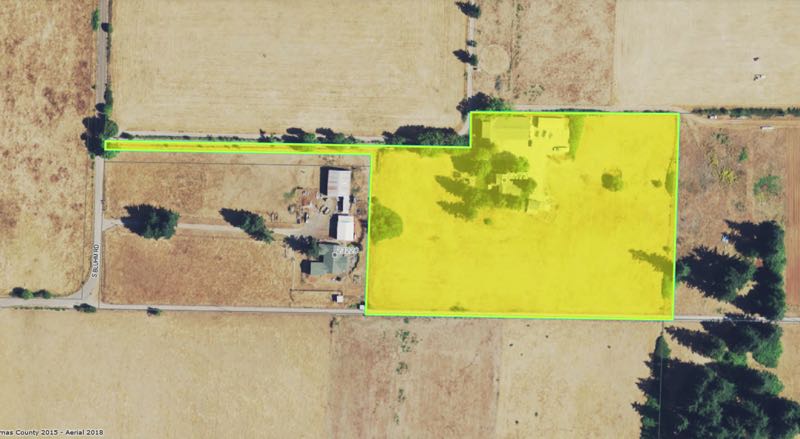 An aerial view of the 7.7 acre plot of farmland where NW Bible Training operates./Clackamas County Planning and Zoning Divisin/PMG Photo

A faith-based addiction recovery program that has operated for years on Clackamas County land designated exclusively for farm use has been denied its request to retain the property through certain state-recognized exceptions to zoning laws.

Northwest Bible Training, a Christian nonprofit supporting addiction recovery through free-of-charge religious instruction, was notified to vacate a 7.7-acre parcel of Beavercreek-area farmland in January 2020 after the county found the organization to be operating a dormitory inside an on-site structure unauthorized for residential use.

Following a series of public hearings on the permit violation, county commissioners on Jan. 26 upheld the eviction notice by denying Northwest Bible Training’s request to be granted an exception to statewide agricultural and urbanization statutes.

The board majority in the 3-1 vote concurred that the decision was a matter of location and was not a question of the organization’s value.

“This has nothing to do with, from my perspective, the value of what they do, what they’re doing to help people and how they are managing to supply a much-needed service in our community,” Commissioner Martha Schrader said. “The problem is it is not the right location.”

Commissioner Sonya Fischer said: “Substance-use disorder treatment is a tremendous need that we as a commission value and recognize, and are working towards creating more capacity. But we’re here today for a land-use hearing, and we have before us a roadmap that we are to follow.”

Commissioner Mark Shull, the lone dissenting voter, moved to extend deliberations for one or two additional weeks, but the motion was not seconded.

County planning and zoning staff recommended the denial after determining over months of application review that Northwest Bible Training’s proposed land use did not adequately meet all of the state’s planning goal exception criteria, which require proof of an area-specific need for the land use, a demonstrated inability to operate elsewhere and analyses of the unauthorized use’s consequences and compatibility with the surrounding area.

The Northwest Bible Training Center in unincorporated Clackamas County is one of 20 residential treatment facilities nationwide owned and operated by parent company Mission Teens. The Oregon branch was located in North Portland from 1994 to 2018, when the center was relocated to “provide outdoor activities essential to their mission, and to escape growing impacts of population growth, increased availability of drugs and alcohol, and a loss of connection to nature,” per the organization’s exception request application.

Northwest’s application stated that it “uses its property like a church,” however, “is not, in fact, a church,” describing itself in a variety of ways throughout the application, including as a “faith-based addiction recovery farm” with similarities to a boarding school and a “farm labor dwelling.”

“Since the proposed use would neither be limited to five or fewer individuals nor be exclusively located within the existing residence it would not meet the definition of a ‘Residential Home,’“ according to county staff, who added that Oregon law includes a definition of a residential treatment facility that allows for treatment of between six and 15 individuals, however that use is unauthorized within zones exclusively designated for farming.

In reviewing Northwest’s proposal for an exception to Oregon’s agricultural planning goals, county staff additionally determined the proposed land use to be urban rather than rural, reasoning that the use will primarily serve urban populations and will rely upon staff, volunteers, essential goods and services from urban areas to operate.

Based upon staff findings, “the use that the proposed ‘faith-based addiction recovery farm’ most closely resembles is a congregate housing facility,” which staff said is only legal within the county’s urban growth boundary.

Per Clackamas County’s zoning and development ordinance, congregate housing facilities contain “more than one dwelling unit” and provide “common facilities and services for residents who require or desire a more supportive living environment than typically afforded to residents in multifamily, three-family, two-family, or single-family dwellings. Regular on-premise supervision by a registered physician, registered nurse, or other health care provider may be included.”

Staff said they could not conclude based on Northwest’s application materials that the use had a specific reason it could not operate addiction recovery services within the urban growth boundary rather than upon the plot of farmland, which staff said is federally classified as having “high value agricultural soils.”

The county and Northwest also disagreed on the situational application of a bill that requires plaintiffs to prove the land use regulation in question has substantially burdened its ability to worship freely.

The Religious Land Use and Institutionalized Persons Act (RLUIPA) was passed in 2000 to “protect individuals, houses of worship, and other religious institutions from discrimination in zoning and landmarking laws.”

The county addressed its responsibilities under RLUIPA, contending that denial of Northwest’s request is not unequal or discriminatory based on religion, adding that non-religious institutions such as schools would not be allowed on the high-value farmland either, and any applicant pursuing a goal exception would be subject “to the same individual assessment and high bar for evidence and analysis.”

Among the court cases Northwest cited to support its RLUIPA claim was a Sikh society’s successful appeal in 2006 of a California county’s multiple denials of the society’s conditional use requests to construct a religious temple.

However, as Clackamas County staff point out, a 2007 trial between Timberline Baptist Church and Washington County relied on the Sikh society’s case for the precept that a land use regulation substantially burdens a religious exercise when it is ‘“‘oppressive’ to a ‘significantly great’ extent”‘ and imposes a ‘significantly great restriction or onus upon such exercise.’“

Regarding the substantial burden, Northwest challenged: “Aside from a high financial cost, relocating would take an extended search and a major disruption would occur if the residents were relocated, or the use was denied outright.”

The organization continued that relocation “isn’t feasible without severe financial and operational hardship” to future operations.

“Very few small farm properties are available that offer the square footage, amenities, close proximity to an urban area, and private setting safely buffered from the temptations of the city,” the organization added.

Clackamas County maintained that the denial of Northwest’s request would not constitute a substantial burden based upon the application materials provided because the costs associated with relocating operations are not unique to religious organizations.

“The financial ability of a church to acquire property and the existence of market-based constraints that apply equally to religious and non-religious land users have no bearing on whether a jurisdiction has caused a “substantial burden” on a church,” per the county.

County staff opened a land-use-violation case against Northwest after becoming aware of its dormitory use of the building in 2019, finding non-permitted additions including a “kitchen, dormitory style bathrooms, and associated mechanical and electric improvements” upon further inspection, according to the county.

Code-enforcement officials found during a pair of hearings in July 2020 that the county should uphold the notices it issued to the organization requiring they vacate the structure deemed a “dangerous building” to live in, according to county code.

Northwest’s request for an exception received multiple hearings from November 2021 to this January, with former participants and current representatives of the treatment program explaining how the program helped many people overcome drug and alcohol addiction, homelessness and trauma.

Testimonials in opposition of Northwest’s proposed use of the farmland mainly centered around farmland-protection concerns from neighboring farmers and further concerns about the use setting an unwanted precedent of urban use in a rural area. The county additionally received several letters from Beavercreek-area residents, the vast majority of which were in opposition to the proposed exception.

While commissioners expressed support for Northwest’s mission throughout the series of hearings, the majority of the board cited their basis for denial to be the general inconsistencies with Oregon’s exception statutes as well as concern regarding the precedent that could be set by approving the exception request in an area where farmland and farming activities are intended to be protected from urbanization.

Chair Tootie Smith said while she was “hopeful” the board would be able to reach a “yes” vote on Jan. 26, yet agreed that Northwest’s application did not meet state or county zoning requirements. Smith welcomed the organization appeal the decision, if it so desires, and she encouraged it to continue its dedication to serving county residents.

Feb 1 2022
News source:
Pamplin Media Group
Keywords:
substance use disorder, clackamas
×
This article is for premium subscribers. If you are one, please sign in below.
You can see two more premium stories for free. To subscribe, click here. We depend on premium subscriptions to survive, and they are tax deductible.
Sign InGo Premium Not now