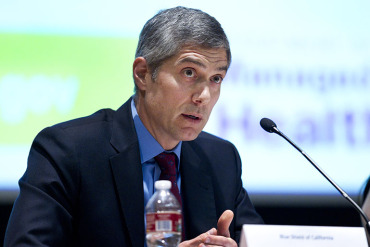 In its first detailed disclosure on executive pay, nonprofit Blue Shield of California said Chief Executive Paul Markovich made $3.5 million last year – a 40 percent increase since he took the top job in 2013.

The San Francisco-based health insurer has faced criticism for years from consumer advocates about its lack of transparency on executive compensation, and the issue attracted even more scrutiny after a state audit raised questions about the insurer’s big pay increases and large financial reserves.

Following that audit, in 2014, California revoked Blue Shield’s state tax exemption, which it had held since its founding in 1939.

In the report issued Thursday, Blue Shield for the first time listed the compensation for its 10-highest paid executives by name. The company also offered details, such as base salary and incentive awards.

Blue Shield is California’s third-largest health insurer with 4 million members and $14.8 billion in annual revenue. The company’s 10-member board is led by Chairman Robert Lee, a retired Pacific Bell executive, and also includes Leon Panetta, who served as defense secretary and as director of the Central Intelligence Agency during the Obama administration.

“While we have been providing reports as required to regulators, it left something to the imagination,” said company spokesman Steve Shivinsky. The company wanted to “lift the veil and make sure we are going above and beyond what is required so there is a higher level of transparency.”

Shivinsky said Markovich’s pay increases reflect the company meeting or exceeding many of its performance goals as well as the overall growth of the company. His reported compensation doesn’t include retirement plan payouts that accumulate over time and would be reported when an executive leaves the company, Shivinsky said.

Consumer advocates said Blue Shield waited far too long to share details with their policyholders and the public.

“This is the kind of information that should have been forthcoming from Blue Shield a long time ago,” said Anthony Wright, executive director of Health Access, a consumer advocacy group. “We are paying for these salaries through our premiums.”

Jamie Court, president of Consumer Watchdog in Santa Monica, said the new report still doesn’t address all of the deferred compensation and retirement money that top executives could leave with.

“Blue Shield is a black hole when it comes to where the money is going,” Court said. “They are the least transparent health insurance company in America.”

The company didn’t provide information about executive pay until it was required to do so by a 2010 state law. Even then, the company wouldn’t put names with the amounts listed and didn’t spell out what was included in terms of salary, bonuses or other compensation.

In the new report, Blue Shield didn’t provide any details on payouts prior to 2015, including for former CEO Bruce Bodaken.

Michael Johnson, the former public policy director at Blue Shield who has become a critic of the company, said last year that Bodaken received about $20 million as part of his 2012 retirement package, on top of his annual pay. He was chairman and CEO from 2000 to 2012.

Blue Shield had omitted the pay for Bodaken and other executives who had departed during 2012 from a state filing that required annual compensation data on the company’s 10-highest paid employees.

The company said it interpreted the rule to apply only to executives still employed at the time it filed the paperwork, which was March 2013 in that case.

Blue Shield insists it did nothing wrong, and the company called the $20 million figure for Bodaken “speculative.”

“We won’t go and revisit previous board decisions or payments made to executives,” Shivinsky said. “Our board spent a lot of time discussing this, and going back in time didn’t seem like a reasonable step to take.”

Although pay increases and the former CEO’s retirement package have drawn fire, the annual compensation of top executives is comparable to what other health care companies pay. Many of Blue Shield’s competitors are publicly traded industry giants that pay their CEOs more.

But Kaiser Permanente and other insurers are more transparent about salaries than Blue Shield. Kaiser lists compensation for dozens of executives in its federal 990 filings as a nonprofit, tax-exempt organization.

Blue Shield doesn’t file a form 990 because it falls into a unique category. It has paid federal income taxes for years under a change Congress made in 1986 to treat large Blue Cross Blue Shield health plans the same as for-profit insurers. But it had been exempt from California income taxes before the state revoked that status in 2014.

In the new disclosure, the second- and third-highest paid executives for 2015 are no longer at the company.

Janet Widmann, who was then an executive vice president, received $3.4 million last year. That amount may include one-time payments such as retirement or pension money, according to the company. Next was Robert Geyer, the former senior vice president for customer quality, who made $2.5 million.

In all, the top 10 executives at Blue Shield received $18.8 million.

The questions about transparency have come as the insurer has experienced significant growth. Blue Shield’s enrollment last year shot up 17 percent to 4 million members, due in large part to the $1.2 billion acquisition of insurer Care1st. Annual revenue also increased 11 percent to $14.8 billion.