‘Medicare For All’ Emerges As Early Divide In First Democratic Debate

By:
Shefali Luthra of Kaiser Health News and Jon Greenberg of PolitiFact 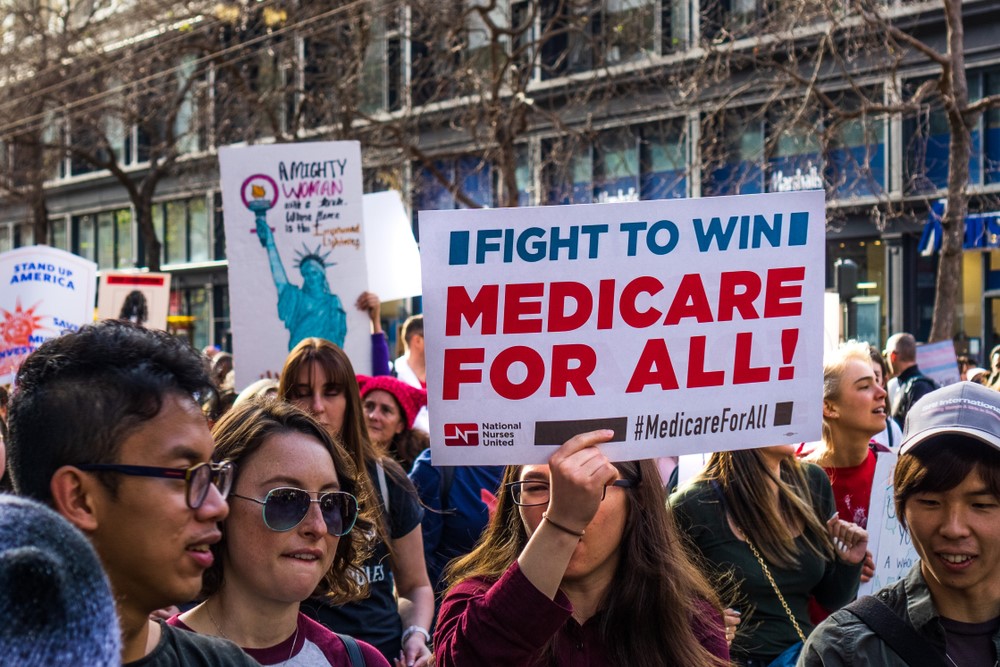 During Wednesday night’s Democratic presidential primary debate — the first in a two-night event viewed as the de facto launch of the primary season — health policies, ranging from “Medicare for All” to efforts to curb skyrocketing drug prices, were among the key issues the 10 hopeful candidates onstage used to help differentiate themselves from the pack.

But the candidates broke ranks on the details and not all of their claims stayed strictly within the lines.

Only two candidates — New York City Mayor Bill de Blasio and Warren — raised their hands in favor of banishing private insurance to install a government-sponsored Medicare for All approach.

Klobuchar, a single-payer skeptic, expressed concern about “kicking off half of America off their health insurance in four years.” (That’s correct: In 2017, a majority of Americans had private coverage, with 49% getting that insurance through work, according to the Kaiser Family Foundation.)

Former Texas Rep. Beto O’Rourke, who also supports maintaining a private insurance system, outlined his own universal health care plan, based on a “Medicare for America” bill in Congress.

The single-payer talk set off other discussions about the role of health insurance and the cost of care. We fact-checked some of the biggest claims.

We contacted Warren’s campaign, who directed us to a report from the National Association of Insurance Commissioners, a nonpartisan group of industry regulators. It supports her assessment.

The report says that in 2018, health insurers posted $23.4 billion in net earnings, or profits, compared with $16.1 billion a year prior.

This came up in the context of Warren’s support for eliminating private insurance under a Medicare for All system. However, the financing and price tag of such a system is unclear.

Booker: “The overhead for insurers that they charge is 15%, while Medicare’s overhead is only at 2%.”

This is a flawed comparison. Booker said administrative overhead eats up much more for private carriers than it does for Medicare, the government insurance program for seniors and the disabled. But Medicare piggybacks off the Social Security Administration, which covers costs of enrollment, payments and keeping track of patients.

Also, Medicare relies on private providers for some of its programs, and overhead charges there are higher. Medicare’s overhead is less than that of private carriers, but exact figures are elusive.

The insurance companies’ trade group, America’s Health Insurance Plans (AHIP), reported in 2018 that 18.1% of private health care premiums went to non-health care services. That includes taxes of 4.7% and profits of 2.3%. The Medicare trustees reported that in 2018, total expenses were $740.6 billion, with administrative expenses of $9.9 billion. That comes to 1.3%, less than Booker said.

A 2005 study Warren co-authored and a 2009 paper both found that health care expenses were a leading cause of personal bankruptcy. But these claims have come under dispute, in particular from academics who suggest that people may overstate the role medical bills play in their financial problems. Other research suggests a far narrower impact, though that, in turn, has been criticized for focusing only on adult hospitalizations.

That said, research from the Consumer Financial Protection Bureau found that medical bills are a leading cause of personal debt — in 2014, the CFPB found that nearly 20% of credit reports included a medical debt tradeline.

But Rep. Tulsi Gabbard (Hawaii) drew on examples of universal health coverage in other countries to explain why she still supported some private insurance options.

Gabbard: “If you look at other countries in the world who have universal health care, every one of them has some form of a role of private insurance.”

This is correct. Virtually every country with universal health care includes a role for private insurance. Some allow it to cover services not addressed by the national plan. Others allow it as a means to get care faster. Others heavily regulate it as a principal source of coverage.

For instance, Canada, the model for the principal Medicare for All bill, allows private insurance to address prescription drug coverage, private rooms in hospitals and vision and dental care. (It is not allowed to compete with the government plan.) In England, about 10% of people — mostly wealthier people — elect for private coverage, which can yield faster access to care. Countries such as the Netherlands and Switzerland heavily regulate private coverage.

Beyond Medicare for All, candidates touched on strategies to bring down drug prices as well as other issues.

This is accurate, according to a report from Pharmacy Benefits Consultants, an industry group, which listed a number of pharmaceutical products experiencing price increases as high as 1,468%.

And the numbers are even less flattering than Klobuchar suggested.

An analysis by the Associated Press found that, between January and July 2018, more than 4,400 branded prescription drugs experienced price increases. Meanwhile, data compiled by Rx Savings Solutions found that the list price of more than 3,000 drugs went up this year.

O’Rourke: “In Texas, the single largest provider of mental health care is the county jail system.”

This is not a Texas-specific issue. According to a 2011 NPR report, it is more common to see Americans getting mental health care in jails and prisons than hospitals or other dedicated treatment facilities.

Election Day is 495 days away.